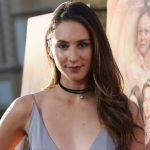 Troian Avery Bellisario simply named as Troian Bellisario is an American actress. She grew up in this industry, so it’s possible even to say that she has acted and directed in her blood. At the age of three years, old Troian started acting and her very first role was in her father’s movie named ‘Last Rites’. She first rose to prominence as Spencer Hastings in “Pretty Little Liars”. For her performance, she has won two Teen Choice Awards out of six nominations and a Young Hollywood Award.

Troian Bellisario and Patrick J. Adams Welcome First Child. The 32-year-old Pretty Little Liars actress has given birth to her and the 37-year-old Suits star's first child, a baby girl. Adams also posted the news on Instagram. Pretty Little Liars star Troian Bellisario and Suits actor Patrick J. Adams never actually confirmed the news that they were expecting a baby, but now, the could has officially confirmed the arrival of a baby girl. On Monday, Bellisario who has been out of the public eye since she and her husband attended former Suits star Meghan Markle's Royal Wedding in May took to Instagram to post a photo of a glimpse of her newborn daughter.

Stunning and gorgeous Troian Bellisario born on October 28, 1985, in Los Angeles, California, the USA with the birth name of Troian Avery Bellisario. She belongs to mixed ethnicity background, which could be cited as one of the reasons for her exotic good looks. Daughter of a TV producer Donald P. Bellisario and his beloved wife actor Deborah Pratt, it was pretty obvious for her to go the similar field. Since either of her parents belonged to the industry, it didn’t take much for her to enter the business. As a matter of fact, she had long started her career as a tot. She was only three years of age when she made her debut on film “Last Rites”. It was like she was destined to become an actor. However, she continued her education despite the early start of her career. She’s graduate from University of Southern California’s School of Theatre. Her birth sign is Scorpio and her nationality is American.

Charming and gorgeous Troian has something unexplainably magnetic about her. Always compared with the legendary heroine Audrey Hepburn, Troian definitely got something these generation women don’t. She’s five feet and seven inches. Her body measurement is 30-23-33 which means she’s extremely lean. It’s because of her absolutely perfect height and gorgeous slim figure that makes any outfit work on her. She looks fine and since she belongs to the entertainment zone, she never undermines fashion. Always trendy and super hot Troian knows what works and what doesn’t. She has the ability to look both classy and funky. Also, like any actors, she’s also hawked eye about her workout routines and diet. She watches the food intake so as to control her weight and look fresh even. It’s no wonder she’s achieved such sleek and toned figure that looks amazingly smoking hot on bikini wear. Her eye color is Light Brown and the hair color is Dark Brown. Her weight is approximately around 54 kilogram or can be stated as 119 pounds. Her bra size is 30A.

About her personal life biography, she’s currently dating the actor and photographer Patrick J. Adams. Her relationship with boyfriend, Patrick has only been a couple of years old. But looking at the two of them, they’re heavily in love. Besides, they also make a really good looking pair. Despite busy work schedule and living apart due to work commitments, they both have figured out ways to sustain their long-distance relationship and remain happy. Troian and her guy have broken the myth that says long-distance relationship doesn’t last. Both these individuals are setting an example that if love is there in heart, anything is possible. We wish them the best for their future ahead.

The couple declared their engagement in 24th February 2014. Bellisario and Adams married on December 10, 2016, in Santa Barbara, California. In August 2018, E! News confirmed Bellisario was pregnant with her first child. On October 8, 2018, Bellisario announced via Instagram that she had given birth to their first child, a girl. She stated she loves spending most of her time with her boyfriend traveling to countries to countries across.

Net worth of Troian

A talented and gorgeous actor has just reached the 32 and already has the estimated net worth of $3 million. She has made the wealth from her own hard work and dedication. And she holds the potential to become bigger than she is as of today. Her hobbies include dancing, writing and playing guitar.

Details about her can be obtained from wiki and other personal sites relating her. Also, her fans and admirers can fetch more information about the stunner through her fansite and another networking site available on the internet.