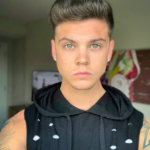 Tyler Baltierra is an American MTV personality, model, author, and social media star. He first appeared on the show Teen Mom alongside his pregnant girlfriend, Catelynn Lowell. Along with other former Teen Mom stars he returned for a revised version of the show. The revived show is called Teen Mom OG. He became famous for this reality show. Today, let's explore the facts related to Tyler Baltierra wiki, career, affairs, net worth and many more.

Tyler Baltierra Was Sexually Abused In His Childhood

In his new book, Tyler has admitted his horrific childhood sexual abuse and how it has affected his life since then.

This incident left him wanting to have sex with girls his own age. But he was only 10 years old. He soon dated girls. If the girls did not agree to have sex with him, he would simply dump them.

Later he dated Catelynn. After 10 months of dating, she gave in to Tyler’s sexual desires. This soon had resulted in Catelynn getting pregnant at the age of 16. The pregnancy was documented on the first season of MTV’s 16 & Pregnant.

Who are the parents of Tyler Baltierra?

Back to his early life, Tyler was born in Mount Clemens, Michigan to parents Kimberly Forbes and Butch Baltierra. He has a sibling named Amber Baltierra. Baltierra is an American citizen and belongs to white ethnicity.

He graduated high school in 2011, and after that, he attended Baker College majoring in psychology. Baltierra stated that he wanted to be a social worker and wanted to work with at-risk youth.

How did Tyler Baltierra pursue his career in the TV Industry?

Reflecting his personal life, Tyler is a married man and is a father of two daughters. Baltierra married his longtime girlfriend, Catelynn. She became pregnant when she was 16, but they gave up their daughter Carly for adoption as they were too young to look after her.

Soon Tyler popped the question. The couple got engaged and were set to be married in July 2013. However, after attending therapy, He decided to postpone the wedding indefinitely. Eventually, a date was set. The couple married on August 22, 2015.

On New year’s day of 2015, the couple welcomed their second child. The baby girl was named Novalee Reign. His wife Catelynn was announced to be pregnant in late 2017. On February 24, 2018, rumors circulated that wife Catelynn had suffered a miscarriage. Later, she confirmed it was true.

They have been together for 14 years. Through all the years he has been a good partner to Catelynn. He has supported his family at all times. He has tweeted several times his love and support for Catelynn especially when she miscarried and underwent therapy several times.

What is Tyler Baltierra Net Worth?

Tyler derives a majority part of his net worth from his reality career. He has accumulated a massive portion of his wealth from MTV's Teen Mom along with his wife, Catelynn. He also appeared on the revival of the show named as Teen Mom OG.

The reality star has also mustered his fortunes by appearing on VH's Couple's Therapy starring alongside Flava Flav, Koe Francis, and Chingy. He also released his book with his wife called Conquering Chaos which received positive reviews. Tyler also earns a hefty amount from his crafts business with Catelynn called Tierra Reign.

However, Tyler’s net worth and salary are not publicly shared yet. Since he is a rising personality with a booming business, he might be worth six figures.

How tall is Tyler Baltierra?

Observing his body statistics, Baltierra stands 5 feet 11 inches in height. His weight is 75 kg. Tyler’s body build is now slim. His hair is dark brown in color, matching his brown eyes. He used 9 (US) size of the shoe and has a 14.5 inches bicep size. Further, his body measure 40-30-45 inches.

Trivias About Tyler Baltierra You Need To Know.