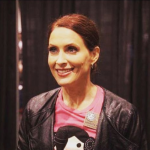 Vanessa Marshall is an American actress, voice actress, model, and singer. She is widely known as voice-over for animated cartoons and video games. She started voice acting after being discovered during a solo performance. She is popularly known for her work on Ben 10(2006,2016), Justice League; Crisis on Two Earths(2010), Metal Gear Solid V: The Phantom Pain(2015), Star Wars Rebels (2014) and Lego DC Comics Super Heroes: The Flash(2018). She is well-known for playing the role of Veronica in the TV series Law & Order(1994).

Where is Vanessa Marshall from?

Vanessa was born in Santa Monica, California, the U.S. on October 19, 1969. Her mother is Joan Van Ark, an actress, and her father is John Marshall, a reporter. She has not revealed her brother's and sister's details. She is an American by nationality and her ethnicity is White. Her religion is Christianity and her zodiac is Libra. She was educated from high school in New York City, New York. She is a graduate of Princeton University in 1991. She completed her Master's Degree in Fine Arts from New York University.

Why is Vanessa Marshall famous?

Vanessa Marshall is best famous for performing as a Voice actress for several animated movies, Hollywood films and video games since 1999. She has done voice works for famous films and video games like Justice League, supernova, Teen Titans Go! To the Movies, Metal Gear Solid: Portable Ops, Spider-Man 3, Star Wars: The Old Republic, Mortal Kombat 11, Hitman and many more. Initially, she began her acting career from the debut role of Veronica in the TV series Law & Order in 1994. she then took the role of assistant in TV series City Guys in 1999. Her other notable films and TV series include Jack Frost 2: Revenge of the Mutant Killer Snowman(2000),  Scrubs(2001), The Bold and the Beautiful(2007) and Jane the Virgin(2017).

Moreover, in 2018 she has done the voice job for the video game, Lego DC Super-Villians and in 2019, she did the same in the video game, Mortal Kombat 11 and  Marvel Ultimate Alliance 3; The Black Order. Throughout her career, Vanessa has nominated by BTVA Television Voice Acting Award as most Best Vocal Ensemble in a Television Series over five times from 2013 to 2018.

Who is Vanessa Marshall married to?

The 50 years old voice actress currently single however she was married to Canadian actor and rapper in animated series, video games, and narration, Andrew Kishino from 2001 to 2007. While being together, they founded Marsh-Kish Productions, a voice-over production company and have both appeared as main characters in The Spectacular Spider-Man. The couple has no children from their marriage. Also, there is no legit report revealing her previous affairs and now.

What is Vanessa Marshall worth?

The multi-talented Vanessa has an estimated net worth of $5 million as of 2019. Her major source of income is her voice actress profession. She has been giving her voice performance in top-rated animations and video games like Ben 10(2006,2016), Metal Gear Solid V: The Phantom Pain(2015)staring, Lego DC Comics Super Heroes: The Flash(2018) and many more since 1999. She has been doing it for two decades now. So must have been earning a decent amount of sum. Additionally, she is also the actress famous for her role in TV series Law & Order(1994) and couple more films as well. Moreover, she is an occasional model too. Adding all this to account, her present net worth is not too bad. Details about her car collection, houses, and other businesses are still under review.

How tall is Vanessa Marshall?

Vanessa Marshall, even with the age of 50 has maintained a tight and fit body structure. She stands a decent height of 5feet 8 inches tall. Since she has a slim body type, her weight size is only marked down at 55 kg. The deserving model faculty personality has an attractive face and a sweet smile. Her hair color is brown and eye color is blue. Further her body Measurements are 37-27-36 inches.  She walks on a shoe size of 9 US and wears a dress size of 6 US. Her bra size of 34c.Vanessa has a straight sexual orientation.