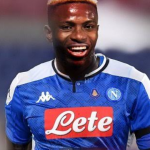 Victor James Osimhen widely recognized as Victor Osimhen is a professional footballer from Nigeria who is playing for the current team, Napoli as well as for the Nigeria National team. In the year 2020, he transferred to Serie A club Napoli for a club-record fee of €70 million, making him the most expensive African transfer to date. He plays by wearing shirt number/jersey number of 9. His playing position is forward. He began his senior career in Germany at VfL Wolfsburg in the year 2017. After that, he shifted his team to Belgian side Charleroi on loan in the 2018-2019 season. Later, he again moved to France at Lille before joining the club, Napoli. Being a talented footballer, he was nominated the club's Player of the Season. He scored his very first goal for Napoli on 17th October 2020 against Atalanta. 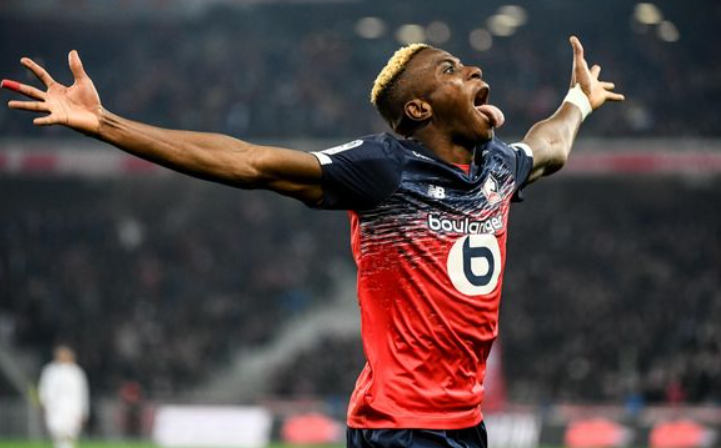 What is the Nationality of Victor Osimhen?

Victor Osimhen was born with the real name/birth name of Victor James Osimhen on 29th December 1998 which makes him age 22. As of 2020, he celebrated his 22nd birthday. His place of birth is in Lagos, Nigeria. Thus, he holds Nigerian nationality and his ethnic background is Nigerian-Black. His race is black. He is Christian by religion and his Zodiac sign is Capricorn. He was born to his late mother and father, Elder Patrick Osimhen. He was the last of six children born to his lovely family. Thus, he has five siblings altogether. One of his brother's names is Andrew. His brother Andrew Osimhen, had once revealed how Victor, as a baby, used to be strapped to their late mother's back and would stand in Lagos traffic selling water in sachets to help the family make ends meet. His family surname 'Osimhen' means 'God is good'. He came from a poor family background. Concerning his education, he attended Olusosun Primary School.

How was the Football Career of Victor Osimhen?

How was the International Career of Victor Osimhen?

What is the Net Worth of Victor Osimhen?

As per sources, the net worth of Victor Osimhen is believed to have €27 Million as of 2021. He is making a salary of €5 Million yearly. On 31st July 2020, Serie A club Napoli announced the signing of Osimhen, for a club-record fee of €70 million potentially rising to €80 million with add-ons, making him the most expensive African transfer to date. At present, his market value is €70 Million. His major source of wealth comes from his football career and he is satisfied with his earnings. He is making good money from his career and he is living a cool lifestyle.

Who is Victor Osimhen Dating?

Victor Osimhen is not married yet and he is still to get married. At the time of writing, there is not much information revealed about his personal relation and girlfriend as he always maintains a distance in his personal life and media. But we know he isn't married and has no wife. Since he is still unmarried and single there isn't any chance of him being through a divorce. More and additional information about him can be obtained from Wiki. He's in fact got a lot going on for him career-wise, so probably he does not have much time left for relationships and all. He is currently focusing on his career rather than spending his valuable time making a girlfriend. His sexual orientation is straight and he is not gay.

Back then, his name was once linked with his ex-girlfriend, Blessing Osimhen. As of 2018, he deleted all pictures of him with her. It seems that he is in a relationship with a new girl as he and his new girlfriend had reportedly arrived in Italy together on a private flight and passed the night at the Hotel Britannique in Corso Vittorio Emanuele after spending the evening with club boss Gennaro Gattuso ahead of closing Napoli deal. Thus, he has not confirmed anything about it.

How tall is Victor Osimhen?

Victor Osimhen is a very handsome man with an athletic body build. He stands tall at the height of 6 ft 1 in or 1.86 m. His balanced weight consists of 77 KG. His eye color is black-brown and his hair color is faded yellow as he dyed his color. His hair type is short and curly. His other body measurements such as chest size, waist size, bicep size, and more are still to get revealed yet. He maintains his body a lot by doing frequent exercises. Overall he has got a healthy body with a charming smile and glowing face attracting a lot of people towards him.