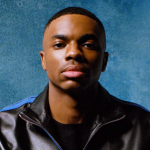 Vincent Jamal Staples is an American rapper and singer who is professionally known as Vince Staples. He is well recognized for his 2015 album "Summertime" and for his 2014 EP "Hell Can Wait", this West Coast rapper also released a number of early mixtapes, including "Shyne Coldchain Vols. 1 & 2" and" Stolen Youth". He is also a member of the hip hop trio Cutthroat Boyz alongside fellow California rappers Aston Matthews and Joey Fatts. He began his career by recording with a California hip-hop group called Odd Future. His second mixtape, "Winter In Prague", was produced by hip-hop artist Michael Uzowuru. Vince is also active in social media as he has gained more than 1.2 million followers on Twitter and over 885k followers on his Instagram account. Additionally, Staples released an album, titled "Ramona Park Broke My Heart," on Motown Records on 8th April 2022. He has also won BET Hip Hop Awards for his work in "Kingdom".

What is Vince Staples Famous For?

Where is Vince Staples from?

Vince Staples opened his eyes for the very first time on 2nd July 1993 in Compton, California, the U.S. He took birth with the real name of Vincent Jamal Staples in a Christian religious family. He is American by nationality and African-American by ethnicity. Vince has celebrated his 28th birthday as of 2021 and as per his birthdate, his star sign is Cancer. Thus, his race is black. His father was arrested on Christmas eve whereas his mother's name is Eloise Staples. He is the youngest of five siblings, two brothers, and three sisters.

Regarding Vince's education, he attended Optimal Christian Academy from 4th to 8th grade, which he said was an influential and positive experience. He also attended other high schools: Jordan High School in Long Beach, Mayfair High School in Lakewood, Opportunity High School homeschooling, Esperanza High School in Anaheim, and Kennedy High School, among others.

Vince Staples is an unmarried guy. There is not much about his personal relation and girlfriend as he always maintains a distance in his personal life and media. So we can surely, assume that Vince is not dating anyone as of 2022. He is very much private about his relationship status as he has not shared a word about his partner with the public. Furthermore, talking about his sexual orientation, he is straight.

How much is Vince Staples's Net Worth?

Vince Staples has a net worth of $5 million as of 2022 whereas he has also a handsome amount of salary which is around $2,50,000 per year. With his calm and easy-going personality, he is expected to get more popular in the coming years, and we can expect him to climb the ladders of success. Since 2015, Staples has also appeared in advertising campaigns for Sprite and promoted the brand through his Twitter feed. In addition, his major source of income is his rapping and singing career.

What is the Height of Vince Staples?

Vince Staples has unarguably accomplished a decent height career-wise. He stands at an ideal height of  5 ft 8 in or 173 cm with a balanced body weight of 70 kg or 154 lbs. He has dark brown eyes and hair color. Moreover, his body build type is average.

Trivias About Vince Staples You Need To Know.