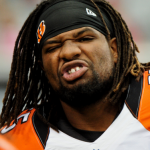 An American football linebacker is named for Vontaze Burfict who is currently playing for the Oakland Raiders of the National Football League (NFL). In the year 2012, he was signed by the Cincinnati Bengals as an undrafted free agent where he played for seven seasons. During his career, he has been involved in many disputes and incidents which has accumulated over $4.2 million in fines and forfeited salary. Overall, he is a very talented footballer.

Vontaze was born on 24th September 1990 in Los Angeles, California. His nationality is American and his ethnicity is Black. His religion is Christian. As of 2019, he celebrated his 29th birthday with his friends and families. His father, a gang member, and convicted cocaine dealer was incarcerated most of the time and never had a relationship with his son. His mother, a city transit bus driver, initially raised Burfict and his older half-brother DaShan Miller (b. 1986) on her own, but eventually remarried and moved to Corona. The name of his parents is Vontaze Burfict Sr and Lisa Williams. He attended Corona (CA) Centennial High School and later went to Arizona State College.

Vontaze is a very handsome footballer with attractive body personality. His body build is athletic with the tall height of 6 ft 1 in or 1.85 m. He has a balanced bodyweight of 255 lb or 116 Kg matching with his height. His hair color is black and his eye color is also black. His other body measurements have not been revealed yet but it will be added soon once we get details about it. Overall, he has got a healthy body.

Vontaze is not married yet but he is not single as well. At present, he is dating Brandie Labomme, his long-time girlfriend. Brandie Marie LaBomme Olson was born on 4th July 1990, in Los Angeles, Cali. she is one of the children born to Donald and Christie LaBomme, also the proud parents of her younger brother Brice Gordon, 25. She met Vontaze while they both attended at Centennial High School, from where she graduated in 2008, in 2012, she graduated with a bachelor in business communications and French from Arizona State. She also worked as a teacher assistant at Frisco Centennial High School from 2006 to 2008; she also was a child center associate for Lifetime Fitness. Then in 2010, became an educator tutor for Supai Middle School; her most recent job was as a leasing agent for Block 1949. The couple started dating on 9th January 2011 and also they have two beautiful daughters together named Aiyanna, born in 2015 and a second daughter born in May 2017. As of 2019, the couple is living a happy life without any disturbances and they are planning to get married soon.

Net Worth of Vontaze

Vontaze is a famous American football player as well as he is a very successful person in his career. As of 2019, his net worth is estimated to have $12 Million. Recently, he signed a one-year, $5 million contract with the Oakland Raiders. His major source of earning is from his football career. But his exact salary has not been revealed yet but it will be added soon. There is no doubt that he is satisfied with his earnings.