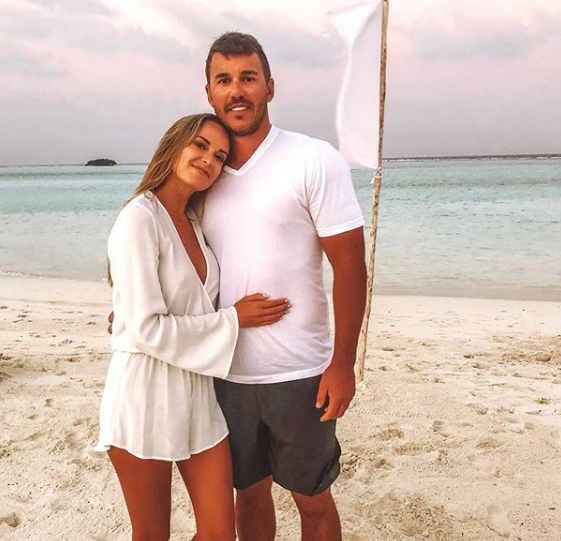 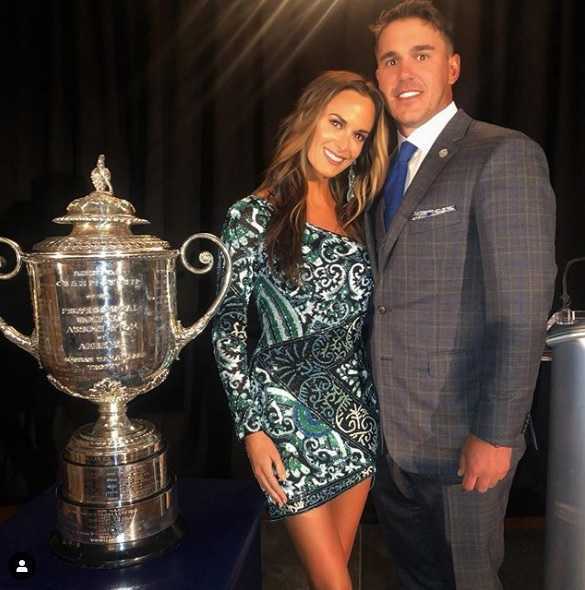 The Florida native Brooks Koepka, a famous professional golf player having almost the fourth championship in his name, the worlds one of the best golfers ever has been dating his love Jena Sims, an actress and model. They have been dating for a few years and looks like their bond is as strong as the player's unbeatable status.
Many of the people have already been introduced to Jena Sims before at the U.S. Open, two years back when Fox announcer Joe Buck accidentally called her the name of one of Koepka’s ex-girlfriends "Becky Edwards".
Buck later corrected himself, but fans become more acquainted with Sims since then. The couple started dating since 2017 and in the span, Koepka has collected his two "US Open titles" and two "USPGA Championships" including the recent, USPGA championship.
Jena Sims Got Embrassed By her Boyfriend: Koepka?
Recently, a video went out where Sims appeared trying to give Koepak a good luck kiss but got rejected twice.
"She put her arm around him but he appeared unaware and turned away from her to fistbump a member of his team. She then steps back before going in for a kiss – only to suffer the same awkward fate."
Jena Sims became an unsuspecting star of the PGA Championship after she was burned not once but twice by her boyfriend as she attempted to turn the second major of the year into the PDA Championship.
However, the misbelieves about their relationship got cleared out after Koepak had a victory kiss with his girlfriend Sims.
But to some extent, Sims isn’t known just merely for being the girlfriend of Brooks Koepka only; she’s famous in her own right. She has her own successful career.

Who is Jena Sims?

Jena Sims is a popular actress and a model who has her own developed name and fame. She is a native of Winder, Ga. She entered her modeling and acting career in the mid-2000s when she competed in local pageants.
Sims, 30, was born in Georgia and she studied International Business from "Belmont University". She was a science student and she took a drug that makes her grow until she is giant.

Brooks Koepka, the World's Best Golfer Seems To Be Immensely In Love With Golf More Than His Girlfriend Jena Sims

Sims's dad was also a good golfer down in Georgia so she is familiar with the sports and enjoys watching the sports.
Sims has appeared in movies, TV shows, and commercials. She even has made a notable appearance on screen with many Hollywood stars like Robert De Niro, Morgan Freeman and Jeremy Renner according to IMDB.
Her acting credits include the lead role in "Attack of the 50 Foot Cheerleader", a comedic horror movie made in 2012.
She also has appeared in "Sharknado and Sharknado 5", in addition to TV appearances on popular shows like "CSI", "Dexter", "One Tree Hill", and "Entourage".
In 2007, she won the "Miss Georgia Teen USA" competition, earning a place in the "Miss Teen USA" competition months later. It was around that time that Sims became the founder of a non-profit organization named “Pageant of Hope,” that hosts beauty pageants for children with cancer and other disadvantages. Since the first pageant in 2006, the organization has hosted multiple pageants each year.

Jena Sims seems to be in deep love with Koepka as she once had said:
“He’s very aware of his success and the timing of our relationship.” “I can’t take the credit for that. All I can do is make him happy. I’m quirky and weird, I                           like to make him laugh. I encourage him to be himself.”
“I really don’t get that stressed because I’m not out there swinging a club,” she said.
She also added:
“It’s so fun. I’m pretty lucky that my actual job isn’t a 9 to 5, so it really gives me the flexibility to go out and watch Brooks' games. I love being able to support Brooks and watch him because he’s so talented. It’s so much fun to watch him."
"I think it’s hilarious to be standing in the galleries watching Brooks and hearing what people say about him. I’ll hear people saying, 'Oh, he’s so muscular. He looks like a linebacker.’ And I’m just standing there. I’m just glad they’re saying nice things about him.
But it’s a lot of fun. Brooks’ crew, his whole team, that’s basically who I hang out with. I’m meeting the girls more and more, and I think with the Presidents Cup coming up, I’ll get closer to the girls, so I’m looking forward to it. I’m slowly making friends.”
Jena Sims has been posting a number of photos either together with her boyfriend Brooks Koepka or about his boyfriend's victory. 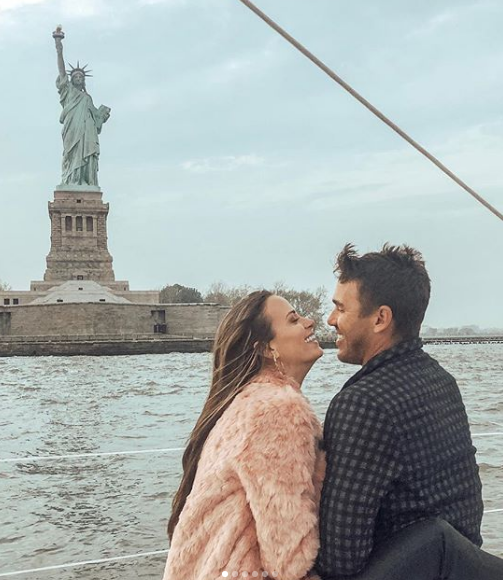