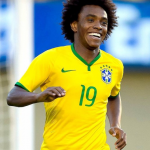 William Borges da Silva Popularly known as William.Who is a brazillian professional footballer.He plays winger and attacking midfielder for Englsih  Premier club Chelsea and the Brazilian National Team.He Proved himself as one of the praised and best best player in the world.

He was born on August 9, 1988 in Ribeirao Pires, Sao Paulo, Brazil , son of Severio da Silva and Maria da Silva.
He Married Vanessa martins in 2011 andThe couple is blessed with two twin daughters named Valentina and Manuella. He follows Christian religion.He belongs to black ethinic group. He is man of Black face , black eye and curly long black hair which makes in Markable and popular.

He started his career playing for Corinthians in 2006.he start his career before joining Shakhtar in August 2007 for a fee of €14 million. He helped Shakhtar Donetsk to won five Ukrainian Premier League titiles in 2008, 2010, 2011, and 2012 and the UEFACup in 2009.He Joined Chelsea in 2013 after spending six years with Shakhtar Donetsk.He was signed on 25 August 2013 for Englsih Premeir League club Chelsea for a fee of £30 million. He helped Chelsea in UEFA Super Cup Chelsea and UEFA European League.

He became a member of the Brazilian National Team in 2011 and represented country at the 2014 FIFA World Cup, Cop America 2015 and Copa America Centenario and FIFA World cup 2018.