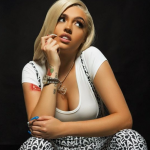 Woah Vicky is an Amerian social media star and an Instagram model. Vicky has managed to gain popularity and fame through her presence on social media sites, Instagram. Vicky is known for posting lifestyle and meme-inspired photos on her Instagram as well. She is also popular among the people for her ongoing clash with Danielle Bregoli.

What is Woah Vicky Famous for?

Where is Woah Vicky From?

Woah Vicky was born on March 7, 2000, in Atlanta, Georgia, United States. Her birth name is Victoria Rose Waldrip. Her nationality is American. Vicky belongs to White ethnicity while Pisces is her zodiac sign.

She is the daughter born to Steve Waldrip(father) and Carla Johnson(mother). Her father is a real estate mogul who is also the owner and president of Homes by Steve Waldrip, Inc. Vicky was raised in her hometown as well as at Marietta and Hiram along with her older sister, Stephanie.

Woah attended Marietta High School and completed her sophomore year after which she was homeschooled by her father. Woah eventually graduated from Penn Foster High School earning her high school diploma.

Woah Vicky started her career in social media site soon after she graduated from her high school. She posted quite a few photos of her and her friends previously. Soon after she got popular for her presence on Instagram mostly for posting lifestyle and meme-inspired photos.

In 2013, she launched her YouTube channel currently, Vicky has more than 660k subscribers with more than 25 million views. Her videos were liked and shared by famous celebrities including Snoop Dogg and Chief Keef.

In 2017, she released a racist diss track, "Ching Chong" which was later flagged and removed from YouTube. During the time, Vicky also claimed that she was expecting a baby from her ex-boyfriend, Papi JJ. However, he denied the fact that he is the father of the baby.

Later on February 18, 2018, Woah Vicky was arrested in a North Carolina mall and was charged with trespassing, assault on a law enforcement officer and resisting, delaying or obstructing an officer.

Woah Vicky is also on ongoing beef with the "Cash Me Outside" girl, Danielle Bregoli. In April 2018, she was caught on video getting into a street fight with Danielle Bregoli(Bhad Bhabie). A video of the same surfaced online where the two were seen exchanging abusing words, and punches are thrown before they were separated by onlookers.

Woah Vicky has been engaged in promoting brands and products through her massive popularity on media sites. She even has her own merchandise store where she sells t-shirts, hoodies, Hip Hop Chainz, Grillz, iPhone cases, beanies, and ski masks.

Who is Woah Vicky Dating?

The 19 years old, Woah Vicky is currently dating her new boyfriend whose name isn't disclosed yet. Vicky previously was in a relationship with Papi JJ, a singer. JJ and Vicky had quite a great time together but soon they broke up after the news of Vicky getting pregnant was fake.

What is Net Worth of Woah Vicky?

The Instagram star, Woah Vicky has quite a good earning through her presence on social media sites mostly on Instagram. Vicky has managed to amass a fortune of $500k as her estimated net worth.

In addition to her fortune, she also enjoys her parents' fortune which might be million dollars no doubt.

How Tall is Woah Vicky?

Woah Vicky is a beautiful teenage girl. Vicky has a well maintained perfect hourglass body physique. She stands tall with a height of 5ft. 4inches(1.61m) while her body weighs around 54kg(119 lbs). Vicky has hourglass body that measures 33-27-35 inches with 33B as her bra size and 5(US) as her shoe size. She has a fair complexion with black eyes and blonde hair.

Trivias About Woah Vicky You Need To Know.