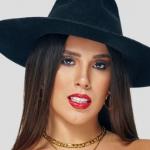 Yahaira Plasencia is a Peruvian singer, model, dancer, actress, television personality, and composer. She is a complete entertainment package. She garnered initial recognition after she was introduced as the partner of the Peruvian soccer player, Jefferson Farfan. Her popularity grew after participating in local reality shows and later joining the female salsa band, Son Tentacion. After she left the group in 2015, she pursued a solo career and made a name of her own in the industry. She has given numerous hit songs in her career. She is also a businesswoman.

What is Yahaira Plasencia Famous For?

Where is Yahaira Plasencia From?

Yahaira Plasencia was born on 23 April 1994. Her full name is Yahaira Maciel Plasencia Quintanilla. She was born in Rimac in Peru and holds Peruvian nationality. She has four siblings. Regarding her educational background, she attended the Esther Caceres Salgado Educational Institute.

Who is Yahaira Plasencia Boyfriend?

Yahaira Plasencia's first known relationship was with Ricardo Ovalle in 2013. She then dated soccer player Hernan "Churrito" Hinostroza. She garnered national attention after she started dating the Peruvian soccer player, Jefferson Farfan. The couple garnered the most media attention at the time. The couple went on to win the Golden Rose Ball, a distinction awarded to the most attractive soccer couples in the world. Jefferson was the one who helped her financially when she was starting her singing career. They later separated.

She has residences in Lima, Peru, and Miami, the United States.

What is Yahaira Plasencia Height?

What is Yahaira Plasencia Net Worth?

Yahaira Plasencia is a complete entertainment package. She is a singer, songwriter, dancer, actress, model, tv personality, and businesswoman. As a singer, she has given numerous hit singles and makes a good income from her music career. As a model, she has worked with several brands. As a television personality, she has participated in numerous tv shows. She has also starred in several television series as an actress. She is also an entreprenuer who runs a spa/salon business as well as a dance academy. Summing up, she makes a good fortune from her career. At present, her net worth is estimated at around $2 million.