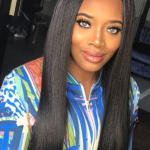 Yandy Smith is an American film producer, entrepreneur, actress, and reality television personality who is well recognized for her appearance in the VH1 reality TV series, "Love & Hip Hop: New York". Her popularity rose from the show leading her to become the brand manager and president of the lifestyle brand, "Everything Girls Love".

Her profession as an entrepreneur has led her to work at Violator Management, Warner Bros Music, and Monami Entertainment. She was even recognized as one of Billboard Magazine’s "Top 30 Executives under 30" back in 2008. Smith's first produced work was an independent feature film, "Life, Love, Soul"(2012). She also has released a guide eBook for entrepreneurs titled ‘The Beauty Of Branding In Business’, in 2016.

Smith came into the spotlight back in September 2021, when she shared images of her and her husband, Mendeecees Harris's vow renewal on her social media sites, which they officially did on MAy 24, 2021 in Dubai.

With her up growing popularity, Smith has managed to amass a healthy fan following with over 6.9 million followers on her Instagram: @yandysmith and over 882k followers on Twitter: @yandysmith.

How did Yandy Smith get famous?

Who is Yandy's mother and father?

Yandy Smith was born on March 21, 1982, in Harlem, New York, United States. Her birth name is Yandy Smith. Her nationality is American. Smith belongs to the African-American ethnicity while Aries is her zodiac sign.

Born to Ralph Smith(father) and Laura Smith(mother), Yandy grew up in her hometown alongside her brother, Juelz Santana. After watching the 1990s hit sitcom, 'A Different World,' which showed student life at a fictional Black college in Virginia, she was encouraged to go to college.

Following which she went on to Howard University in Washington, D.C., one of the schools featured in the television show, from where she got graduating earning a degree in business management.

Soon after her graduation, Yandy Smith started an internship at Violator Management, where she worked as an executive assistant to Mona Scott-Young. As a part of her job, she managed many of the star clients of the company including LL Cool J, 50 Cent, Missy Elliot, and Busta Rhymes.

Yandy Smith Husband: How Many Kids do Yandy Smith and Mendeecees Harris have?

Yandy Smith is a married woman and has been married just once to date. Her first and the only marriage was with her long-term boyfriend, Mendeecees Harris together with whom she appeared in "Love & Hip Hop: New York". They had their first son, Omare Harris in 2012, followed by the second one together, Skylar Smith-Harris in January 2015.

After several years of dating and after becoming the parents of their 2 children, they got married at a royal wedding on May 25, 2015. After 6 years of their marriage, they renewed their vows on May 24, 2021, at BAb Al Shams Desert Resort in Dubai.

Apart from their two children, they are also the parents of their foster daughter, Infinity Gilyard, a YouTube star. Through her marriage with Harris, she also became the stepmother of his children; Aasim and Lil from his past relationship.

Yandy Smith has quite great earnings from her professional career as a producer, entrepreneur, and reality TV personality. Having her career started initially as an intern, Smith has managed to come a long way up becoming one of the popular reality personalities thanks to the show, "Love & Hip Hop: New York".

Her net worth is estimated to be around $12 million. Besides, she is a car enthusiast and has a great collection of cars including Rolls Royce. With her million worth fortune, she lives a lavish lifestyle in a luxury villa in New York.

Yandy Smith is a gorgeous lady with a maintained hourglass body physique in her late-30s. She stands tall with a height of 5ft. 7inch. while her body weighs around 78kg. She has a body measurement of around 34-26-35 inches with deep-set brown eyes and long black hair.