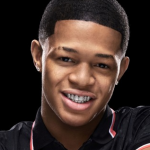 An American rapper, singer, and songwriter, named Osiris Williams is professionally known as YK Osiris. He rose to fame with the release of his songs "I'm Next (Freestyle)" and "Valentine", which were remixed by rapper Lil Uzi Vert. In the year 2019, he signed to Def Jam Recordings, and his single "Worth It" debuted at number 87 on the Billboard Hot 100. he also has a huge fan base with more than 101.3k followers on Twitter, more than 3 million followers on Instagram, more than 60k followers on SoundCloud, and more than 1 million subscribers on YouTube.

YK Osiris has been arrested on aggravated assault by strangulation charges, Fulton County jail records show. He was booked on Monday (Nov. 4) for the felony charge stemming from an incident that took place back on Sept. 7. A police report obtained by TMZ provided alleged further details of the arrest. Osiris was reportedly involved in an altercation with his girlfriend at his birthday party in September. She allegedly confronted the "Worth It" singer after finding a photo of another woman in just a towel on his phone. The dispute reportedly escalated following a shouting match to the point things eventually got physical. His girlfriend allegedly claims that he bit her under her left eye and proceeded to choke her. She then reportedly admitted to biting his lip to get him off of her, and the bathroom incident was soon defused. He has been denied bond and reportedly has a hearing set for later in November.

What is YK Osiris Famous For?

What is the nationality and ethnicity of YK Osiris?

On 7th September 1998 this famous rapper, YK Osiris took birth in Jacksonville, Florida, the USA with the birth name of Osiris Williams. Osiris is of Greek origin and means “powerful,” “smart,” “intelligent,” “strength,” and “knowledge.” In 2022, he celebrated his 23rd birthday with his friends and family. His nationality is American and he belongs to the Black ethnicity. His zodiac sign is Virgo and he is Christian by religion. He was born to Tumeca, his mother who is a hairstylist, and his father. He also has seven siblings; a brother and six sisters. He was born a triplet and is also the oldest sibling. He began rapping at a small age. Artists such as Michael Jackson, Bruno Mars, and the vocal group 'The Temptations' are his sources of inspiration. There are no more details regarding his father, education, and early life.

How did YK Osiris begin his music career?

Who is YK Osiris Dating?

It is always interesting to discuss the relationship details of rappers. Regarding the marital status of Osiris, he is not married yet as he is young to get married and possibly single.

However, in the year 2019, he was assumed to be dating music artist DreamDoll as they were seen getting comfortable with one another in more than one video and also going out on dates. Besides this, there is no information about their dating life.

Moreover, after the song Secret which was released in 2019, he was rumored to be dating Ann Marie who is a music artist. But they have not commented on anything regarding the rumors. As of today, he is focusing on his career and he is living a happy life without any disturbances.

How tall is YK Osiris?

YK Osiris is a well-known face in the world of the rapping industry. His charming personality with a glowing and smiling face has helped him to gain the attention of all the viewers. He is a handsome hunk with short hair. With the dark brown eye color and black hair color, he stands at the tall height of five feet nine inches or 1.76 m. He has several tattoos including the word “Loyalty” on his left arm. He has a balanced body weight of 64 Kg which matches his perfect height. His body build is slim. His other body measurements will be added soon once we get details about them.

How much is YK Osiris's Net Worth?

The net worth of this famous rapper is estimated to have $2 million as of now. But his exact salary is still to get revealed yet but there is no doubt in the mind of his follower that he is earning a considerable amount of salary from his present work. His major source of earning is from his rapping carer. He made all his wealth on his own hard work and dedication. He earned it all by himself and he deserves all of it. He has not done any endorsement until now. Overall, he is satisfied with whatever he is receiving at present.

Trivias About YK Osiris You Need To Know.