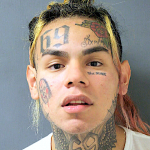 Daniel Hernandez, professionally known as 6ix9ine (pronounced as "Six Nine") or Tekashi 6ix9ine is an American rapper from New York. He rose to prominence following his debut single "Gummo" released in late 2017. His controversial behavior, brute-force screaming technique, and unconventional appearances in his songs make him one of the extraordinary rappers in the Hip-hop music industry. He has been involved in several legal issues and has faced several charges. He was sentenced to a 32-years life in prison for racketeering and firearm charges in November 2018.

What is 6ix9ine Known For?

Where is 6ix9ine from?

Daniel Hernandez came into this world on May 8, 1996, to a Mexican mother and a Puerto Rican father in Bushwick, Brooklyn, New York. He holds American nationality. His sun sign is Taurus. Until the age of 13, Hernandez was raised by both of his parents. Hernandez was expelled from school while studying in 8th grade. And he didn't wish to continue further. His interest in achieving academic qualifications has already vanished from him. In 2009, his father was murdered. Then, he grew up alongside his brother, working various jobs including selling marijuana as well. He worked all this work to support his mother financially.

Significant to his career, Hernandez started releasing his rap songs in 2014. Later, he released songs like Scumlife, Yokai, and Hellsing Station. Due to his aggressive rapping styles, these songs started to draw public attention. He also used anime in his music video, which also made his videos differently. Initially, most of his songs were released by a music label based in Slovakia named FCK THEM. Hernandez became famous over the internet to some extent. Following his fame, Hernandez became associated with fellow New York rapper Zillakam. Later the two started a feud. And the reason was,

Zillakam accused Hernandez of allegedly stealing the songs they had made together earlier. Hernandez featured the song "POLES1469" by Ohio Song rapper Tripple Redd and received significant views on Youtube.

In July 2017, Hernandez started post-Instagram pictures of himself with a different eccentric appearance. His rainbow-dyed hair and a rainbow grill went viral on both Reddit and Twitter. He also inked multiple versions of the number 69 on his body. That turned him into an internet meme and rose to prominence on social media. On November 10, 2017, Hernandez commercially dropped his debut single "Gummo". It eventually reached number 12 on the US Billboard Hot 100. The song was later certified platinum by RIAA on March 5, 2018. "Kooda", the second single released by Hernandez debuted at 61 on the Hot 100 the week of December 23, 2017. Following the huge success, Hernandez started releasing more songs. Hernandez released his third single "Keke" with Fetty Wap and A Boogie with da Hoodie on January 14, 2018.

Hernandez released his first mixtape, Day69 on February 23, 2018. Day69 directly debuted on Billboard 200 album chart at number four with 55,000 equivalents. Among which, 20,000 were pure sales. the mixtape was an outgrowth of the "SoundCloud rap explosion" according to Jon Caramanica of The New York Times. His other songs from the album "Billy" reached number 50 and "Rondo" number 73 on the Billboard Hot 100. Hernandez released the song "Gotti", a deluxe song added to Day69 in April 2018. "Gotti" is a remix version of the previous song he did for artist Packman titled "Got it, Got it". The song was his sixth consecutive Hot 100 entry debuting at number 99. Another release of Hernandez, "Tati" featuring DJ Spinking in June debuted at number 43 on the Billboard Hot 100. Hernandez's July 2018 release, "Fefe" debuted directly at number four on Billboard Hot 100. It was his first song that got included in Billboard Hot 100 Top  Five and reached number three. Nicki Minaj and Murda Beatz are also featured in his latest release "Fefe".
Hernandez and his label 10K projects signed to a two-album, over $10 million deal in October 2019 for one album to be released in English and one in Spanish. On 7th May 2020, he made the announcement that he would be making a comeback to music and releasing a new single on 8th May 2020, which also happened to be his birthday. The music video for the song, "Gobba", was also made public. According to Madison Bloom of Pitchfork, the song makes mention of Hernandez's cooperation with federal prosecutors and testimony, as well as COVID-19 ("They sick, been hot, way before coronavirus") ("Tell me how I ratted, came home to a big bag").
After multiple delays, 6ix9ine finally released "Trollz", a collaboration with Nicki Minaj on 12th June 2020. The song became 6ix9ine's first number-one single when it debuted at the top of the Hot 100. the biggest position drop from number one in the history of the chart was broken by "Trollz" in its second week when it dropped to number 34, however, Taylor Swift later that year broke the record once more with "willow". On 3rd July 220, the third single, "Yaya" was made available. It entered the Billboard Hot 100 at position 99 and fell off the charts the following week. Ib 2nd August 2020, the fourth single, "Punani", was made available.
All of the tracks can be found on "TattleTales", his second studio album, which was released on 4th September 2020. After the album's release, Hernandez complained about how Spotify and Apple Music treated him, failing to mention his new album on their home pages and excluding him from their playlists, which have a significant impact on the charts. He explained that he believed the music business was using these platforms' influence to harm him as a result of his cooperation. Moreover, he was featured in the real crime documentary 69: The Saga of Danny Hernandez, which debuted on Hulu in November 2020.
He made a comeback on February 19, 2021, with the song "Zaza", in which he specifically dissed Lil Durk and Meek Mill, with whom he had a dispute. On the Hot 100, the song debuted at position 90. He dropped the song "Gine", on 15th April 2022, taking another shot at King Von and Lil Durk. The song was also released in association with Gine energy drink, for which Hernandez worked with the firm to create a brand-new drink.

Hernandez has been charged with different counts until today. In October 2015, Hernandez pled guilty to one felony count. He was charged with a felony for using a 13-year-old girl in a sexual performance. The videos of the incidents were also published on the internet. Though, Hernandez claimed to have "no sexual contact" with the girl in November 2017. Under his plea deal, Hernandez must obtain his GED, and refrain from posting sexually explicit or violent images of children on social media. Further, he cannot commit another such crime for two years or Hernandez would receive three years of probation. If not, Hernandez could face up to three years in prison. In January 2018, the court announced that Hernandez failed his GED test. Hernandez could face three years in prison and possible sex offender registration. The hearing of Hernandez's sexual misconduct charges is scheduled for October 2, 2018. Other than sexual misconduct charges, Hernandez served jail time as a minor for assault and the sale of heroin.

Hernandez was arrested on July 12, 2018, in New York for allegedly choking a 16-year-old in Houston's Galleria mall. Hernandez is also under investigation by the New York Police Department for possible involvement in a shooting outside the W Hotel in New York City. Rapper Chief Keef was shot outside the W Hotel on June 2, 2018. Chief Keef was not harmed in the incident. Earlier, Hernadez has been involved in feuds with Chicago rappers Chief Keef and Lil Reese.
Hernandez was kidnapped in Brooklyn on July 22, 2018, early morning. Three unknown assailants grabbed him outside of his home and pistol-whipped him and took $750,000 in custom jewelry and approximately $35,000 in cash. Hernandez claimed he escaped from their vehicle and asked for help from a stranger to call the police. Eventually, he was rushed to the hospital.
In late 2019 he was sentenced to 13 months in prison for working out a deal with the government prosecutors and was scheduled to release from prison in August 2020. However, because of the COVID-19 epidemic, he was released earlier on 2nd April.

On October 29, 2015, 6ix9ine and Sara Moline became parents to a girl named Saraiyah Hernandez, at the age of 18. Along with Marlayana, he also has a daughter named Briella Iris Hernandez, who was born on November 19, 2018.

He is also said to have dated Leezah, a stripper at the New Yor gentleman's club Starlet.

Additionally, he has also dated Jade, whose real name was Rachel Wattley. He started dating Jade, in the last months of 2018, just a few weeks before 6ix9ine received his prison sentence. She continued to support him during his incarceration. Her devotion to the rapper, whose image she has inked on her body, wasn't overlooked, and the couple has commanded social media attention since 6ix9ine's release. But according to the most recent story about their relationship, things may have come to an end.

How tall is 6ix9ine?

6ix9ine stands 5 feet and 6 inches tall. He has a body weight of 64 kg. He has a dark brown eye color and his hair color is also dark brown. But he often dyes his hair in rainbow color.

An American rapper has a net worth estimated at around $10 million. He is one of the extraordinary rappers with unconventional and aggressive appearances.

Trivias About 6ix9ine You Need To Know.