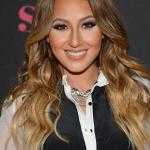 There is no doubt that the beautiful Adrienne Bailon is a multi-talented personality. She is popular as both a singer and an actress. With the golden career in music with the 3LW group that is now known as "2LW" and also as a solo artist, "The Coalition" star, Adrienne Bailon, is also making quite a lot of money. Her acting career helps with her net worth as well. Let's know more about the actress through this article.

When was Adrienne Bailon born?

Recalling her early life, Adrienne Bailon was born on October 24th of 1983, in Manhattan, New York, the U.S. Her mother's name was Nilda Alicea who was Puerto Rican and his father was Ecuadorian named Freddie Bailon. She grew up on the Lower East Side of Manhattan. She has a sister. Her name is Claudette.

There is not much information about their education history though it is said that she studied in high school and the high school for health professions and human services.

How Adrienne Bailon get famous?

Who is Adrienne Bailon's husband?

Reflecting on her personal life, Bailon was started dating singer, Israel Houghton from Feb. 2016. They dated for 6 months and they got engaged in Paris on August 12th, 2016. Later, they married on November 11th, 2016.

What is Adrienne Bailon's net worth?

Being a part of the entertainment industry, Bailon earns the sum of a good amount of money and fame as an American musician, actress, dancer, and television personality. Based on online reports, her estimated net worth said to be $3.5 million at present. However, her salary is yet to be disclosed.

How tall is Adrienne Bailon?

Observing her body physics, Bailon stands a height of 5 feet 0 inches and weighs around 54 Kg. She has a  pair of light brown eyes and brown hair color. She used to wear a 40C (US) bra size and 8 (US) dress size. Further, her body measures  35-25-33 inches and she used 5 (US) shoe size.