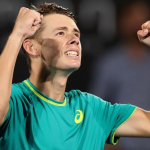 One of the Australian tennis player is Alex de Minaur. He is the second youngest player in the ATP top 100. He achieved 6 ranking in August 2018.

Alex de Minaur was born on 17 February 1999 at Sydney, Australia. He is born to Spanish mother and Uruguayan father. He has three siblings named as Dani, Cristina, and Sara. In 2012, he returned to Australia. Then in 2016, his parents returned to Spain. He can speak English, Spanish and French. He plays right-handed.