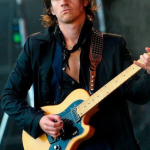 Alex Turner is an English musician, singer, songwriter, and record producer who is best known as the frontman and principal songwriter of the rock band "Arctic Monkeys", with whom he has released six albums. He has also recorded with his side project "The Last Shadow Puppets" as a solo artist. When he was 16, he and three friends formed Arctic Monkeys. Their debut album, Whatever People Say I Am, That's What I'm Not (2006), became the fastest-selling debut album in British history and was ranked at No. 30 on Rolling Stone's list of the greatest debut albums of all time, with the single "I Bet You Look Good on the Dancefloor" becoming a UK number-one hit. After that, the band released studio albums, Favourite Worst Nightmare (2007), Humbug (2009), Suck It and See (2011), AM (2013), and Tranquility Base Hotel & Casino (2018). Arctic Monkeys headlined Glastonbury Festival in both 2007 and 2013 and performed during the 2012 London Summer Olympics opening ceremony. As the co-frontmen of The Last Shadow Puppets, Turner and Miles Kane have released two orchestral pop albums: The Age of the Understatement (2008) and Everything You've Come to Expect (2016). He has won seven Brit Awards, an Ivor Novello Award, and a Mercury Prize (he has been nominated six times).

What is Alex Turner Famous For?

Where is Alex Turner From?

Alex Turner was born with the birth name of Alexander David Turner on January 6, 1986, in Sheffield, UK. He was raised in Sheffield's High Green suburb. He is the only child of secondary school teachers Penny and David Turner. He holds British nationality and his ethnicity is British-Scottish. He has said that his parents came from "very different backgrounds"; his mother, from Amersham, Buckinghamshire, taught German and was "fascinated by language". His father, a Sheffield native, taught music and physics. His parents were both music fans and his earliest musical memories involve The Beatles and The Beach Boys. Turner himself was taught some scales on the family keyboard by his father and took professional piano lessons until he was eight years old. From the age of five, Turner grew up alongside neighbor Matt Helders; they attended primary school, secondary school, and college together. He attended Stocksbridge High School. He excelled in sports, particularly basketball. His teachers remember him as a quiet boy, bright and clever, but “laid-back" in his studies. He met Matt Helders in his primary school and became friends. The duo met Andy Nicholson at secondary school, and the three teenagers listened to rap artists such as Wu-Tang Clan, Cypress Hill, Dr. Dre, Outkast, and Roots Manuva. In 2001, his parents bought him a guitar following which he started writing songs, using a bass guitar and some microphones. Soon he was deep into music and got serious about making a career in this field. In 2002, while still in high school, he formed an indie rock band called "Arctic Monkeys" with his friends Andy Nicholson, Glyn Jones, and Matt Helders. They later added a classmate Jamie Cook. When Glyn left the band, he became the frontman and lyricist. They first practiced at their garages and later, at an unused warehouse in Wath. In 2002, he went to Barnsley College, where he studied English, psychology, music technology, and media. After college, his parents reluctantly agreed to let him skip university for one year to pursue his musical vision. He next took up a barman’s job at Sheffield music venue, The Boardwalk, while exploring musical avenues. His present age is 36 as of 2022.

Who is Alex Turner's Girlfriend?

Alex Turner is currently reserved. He is dating his beautiful girlfriend,  Louise Verneuil (French singer). He was spotted with Louise on multiple dates in 2018. They are going well together and they are planning to get engaged and married soon. His sexual orientation is straight.

Initially, he dated Lauren Bradwell in 2004. After that, had dated Johanna Bennett in 2005. Following their breakup, he became involved in a four-year relationship with writer Alexa Chung (2007-2011). He was also once engaged to American actress, Arielle Vandenberg, which was later called off. In 2015, he began dating model Taylor Bagley.

How much is Alex Turner's Net Worth?

Alex Turner is a musician, singer, and songwriter by profession whose net worth is estimated to have $25 Million as of 2022. He leads two music bands and both have released several albums and the sale of their music gives him this much. He is making his annual salary is in millions of dollars. His main source of wealth comes from the music industry and he is living a lavish lifestyle at present.

How tall is Alex Turner?

Alex Turner has a tall height of 5 ft 7½ in or 171½ cm and his bodyweight consists of 66 kg or 145½ pounds. His hair color is dark brown and his eye color is also dark brown. His body type is slim. He has got a healthy body with an attractive personality.

Trivias About Alex Turner You Need To Know.