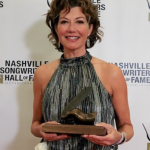 Amy Grant is an American singer, songwriter, musician, TV personality, and author. She began in contemporary Christian music (CCM) before crossing over to pop music in the 1980s and 1990s. She is often referred to as ‘The Queen of Christian Pop.’ As of 2009 she had sold more than 30 million albums worldwide, won six Grammy Awards, 22 Gospel Music Association Dove Awards, and her album was the first Christian album to go platinum. In 2022, she was announced as a recipient of the Kennedy Center Honors. In 1977, she recorded her first album, "Amy Grant", produced by Brown Bannister. In 1986, she scored her first Billboard Hot 100 No. 1 song in a duet with Peter Cetera, "The Next Time I Fall". She released the blockbuster album "Heart in Motion" in 1991  which became her best-selling album to date, topping the Billboard Christian album chart for 32 weeks, selling five million copies in the U.S., and producing her second No. 1 pop single "Baby Baby" and producer another three top 10 on Billboard Hot 100; “That's What Love Is For”, “Every Heartbeat” and “Good for Me”. Apart from her musical career, she hosted the reality TV show, ‘Three Wishes’ and has also authored a number of books, one of the most popular ones being, her memoir, ‘Mosaic: Pieces of My Life So Far’.

Two days after being hospitalized following a bike accident, singer Amy Grant has been discharged and subsequently postponed several concert dates. "Earlier this week Amy Grant was in an accident after hitting a pothole while out riding her bicycle with a friend (note: she was wearing a helmet)," her rep said in a statement to Yahoo Entertainment. "Following a brief hospitalization where she was treated for her injuries, doctors have ordered additional recovery time at home for Amy, where she is now resting comfortably." Her accident occurred Wednesday in Nashville, where she lives with Vince Gill, her husband of 22 years. She began her recovery at the city's Vanderbilt University Medical Center. "Due to the doctor's orders she has had to postpone her upcoming August concerts (Knoxville, Chattanooga, Johnson City, Wilmington)," Friday's statement continued. "The concerts have been rescheduled for April and June 2023. All tickets will be honored at the new performance dates. There are no other changes to her touring schedule at this time. In 2020, Grant underwent open heart surgery to repair a genetic heart condition that doctors had discovered. Her team has thanked her fans for their prayers and well wishes. "Your kind thoughts and heartfelt prayers are felt and received," a post on her Instagram page read in part. "Amy was wearing her helmet and we would remind you to all do the same!"

What is Amy Grant Known for?

What is Amy Grant's Real Name?

Amy Grant was born on November 25, 1960, in Augusta, Georgia, the USA. Her real name is Amy Lee Grant. She is American by nationality and his ethnicity is mixed of English, Scottish, and Welsh. She was born as the youngest one of four sisters. She grew up in a closely-knit family in Nashville, Tennessee and it was her early church-going days that triggered her love for Christian stories, hymns, and songs, that would later go on to influence her work. She is a great-granddaughter of Nashville philanthropist A. M. Burton (founder of Life and Casualty Insurance Company, eponym of Nashville's Life & Casualty Tower, WLAC Radio, and WLAC-TV) and Lillie Burton. She attended Harpeth Hall School. Additionally, she also attended Furman University and Vanderbilt University. When she was a teenager, she taught herself to play the guitar and also worked part-time at a recording studio.

How Rich is Amy Grant?

Singer, songwriter, and musician, Amy Grant has made a huge fortune from her music career. As of 2022, her net worth is estimated to have $55 million. She has not revealed her current salary and career earnings. Her main source of wealth comes from the music industry releasing albums, singles, and songs. She is living a lavish lifestyle at present.

Who is Amy Grant's Husband?

Amy Grant is a married woman to her husband, Vince Gill. Her spouse, Vince is a country singer-songwriter. They got married on 10th March 2000. They have a daughter together: Corrina Grant Gill, who was born on March 12, 2001. Today, the happily married couple is enjoying their life a lot. 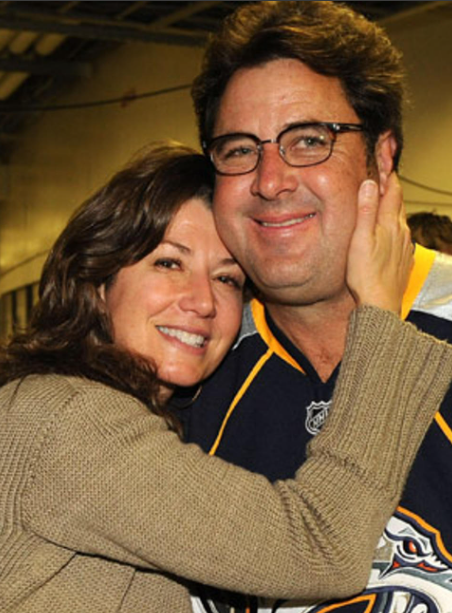 Prior to her marriage to Vince, she was married to fellow Christian musician, Gary Chapman. The pair married on June 19, 1982. They have three children together: Matthew Garrison Chapman, Gloria Mills Chapman, and Sarah Cannon Chapman. The pair later divorced in 1999. In the November 1999 CCM Magazine, Grant explained why she left Chapman and married Gill: I didn't get a divorce because 'I had a great marriage and then along came Vince Gill.' Gary and I had a rocky road from day one. I think what was so hard—and this is (what) one of our counselors said—sometimes an innocent party can come into a situation, and they're like a big spotlight. What they do is reveal, by comparison, the painful dynamics that are already in existence.

What is Amy Grant Height?

Amy Grant has a tall height of 5 feet 7 inches. Her body weight consists of around 58 kg. She has a body measurement of 34-26-33 inches. Her hair color is brown and her eye color is dark brown.