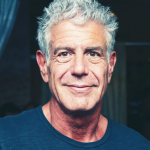 The world-popular celebrity chef Anthony Bourdain is no longer with us. One man, who had inspired many people all over the world committed suicide in a hotel room. Now let’s know his biography and death cause through this wiki!

Death Cause of Anthony Bourdain

Anthony was found dead in Kaysersberg Vignoble luxury hotel room on 8th June 2018. His friend Eric Ripert found him dead in the room. According to the public prosecutor, Bourdain committed suicide by hanging himself.

Just three hours before his death, his girlfriend Asia uploaded an Instagram story printed with the words: ‘FUCK EVERYONE.’ Moreover, she also captioned: You Know Who You Are.

When the news of Anthony’s death swirl throughout the world, she deleted her Insta story. Well, we cannot confirm the death caused to be the couple’s quarrel, but something must have happened. We will be updating his death cause shortly! So, stay tuned with us.

The son of Pierre Bourdain and Gladys Bourdain, Anthony was born in New York City and grew up in Leonia, New Jersey as Anthony Michael Bourdain. He had American nationality and has a mixed ethnicity of French, Spanish, and Ashkenazi Jewish. His zodiac sign was Cancer.

Talking about his education, He studied at the Dwight-Englewood School and attended Vassar College. He dropped out of college and graduated from the  Culinary Institute of America in 1978.

Career and Achievements of Anthony Bourdain

Net Worth of Anthony Bourdain

Although it’s hard to put up an actual annual salary in a figure, according to some online sources, he increased his per year salary up to $1 million.  Before his death, his net worth was estimated to be $ 16 million. There is no doubt that he lived a luxurious lifestyle before his death.

Reflecting on the personal life of Anthony Bourdain, he was possibly single. Although his career took on a successful path his love life couldn’t do so. He had been married twice in his lifetime. Firstly, he was married to Nancy Putkoski in 1985 and live together for two decades before divorcing in 2005. There isn’t any record of a child born from his first married relationship.

Then he married Ottavia Busia on 20 April 2007 and she has appeared in the several episodes of No Reservations. They have been blessed with one child, Ariane born in 2007. This relationship of Bourdain couldn’t get successful and eventually separated in 2016. After the divorce, he made a statement that being away from his child and wife for more than half of a year was straining. After two unsuccessful marriages, he hooked up with Asia Argento in 2017.

Before death, Anthony was decently tall with a height of 6 feet 4 inches and weighs 77 kilos. His skin was white toned, with white hair. Nothing much about his body features were disclosed.