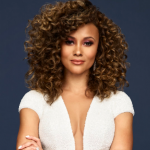 The reality TV show ‘Real Housewives of Potomac‘ is full of twists and turns. Despite being a reality show, the show is full of mix-ups and illusoriness. Similarly, Ashley Darby, who is also an entrepreneur and former pageant holder of Miss District of Columbia shocked her fans when she revealed the separation of her from her husband. Their fight on camera where Ashley threated Michael about divorce, led many heads turn. However, they are still together; the couple might have unquestionably had tough times on the hit Bravo, but they have resolved the problems that once questioned Ashley Darby married life. Today, Let’s discover the facts related to Ashley Darby's wiki, bio, career, and net worth.

What is Ashley known for?

Where is Ashley Darby born?

Back in her early life, Ashley Darby was born as Ashley Boalch. She spent her childhood in Maryland, the U.S with her multiple siblings. She was born as the elder child of her mother Sheila Matthews, but Ashley has never seen her father. She is American-Australian by nationality and belongs to the Mix of Irish and African-American ethnic group. Further, Her Birth Sign is Gemini.

Regarding her education, She went to the University of Maryland.

When did Ashley Darby pursue her TV career?

Who is the husband of Ashley Darby?

When you truly love someone, age is just a number. Ashley Darby husband Michael proposed her over the River Hudson in 2012 while they were taking a helicopter ride. Likewise, Ashley Darby married her husband, Michael Darby who is 29 years elder than her. Her husband Michael is an Australian Real Estate mogul. She was going through tough times before she met her husband, later Michael helped her to overcome in her life.

After dating for almost four years, Ashley Darby married her now-husband, Michael in 2014. Ashley Darby husband was previously married to his ex-wife with whom he has two children who were of the same age as Ashley when they got married.

In July 2017, Ashley Darby shocked her fans when she revealed that she and her husband, Michael have separated. The pair had begun living separately in February 2017. The reason for dispute in their married life was speculated to be their age gap as Ashley Darby’s age was in her 20’s and her husband, Michael’s age was 57 then. However, the pair sorted out their indifference and started living together once again in late 2017. Since then, they are happy being with each other.

Recently, Ashley announced in February that she is expecting her first child with Michael. As the couple gets ready to welcome their little one in July, Michael has been a huge source of support for Ashley during her pregnancy.

How much is Ashley Darby net worth?

Ashley Darby is the co-owner of the restaurant called “Oz Restaurant and Bar.” She has a joint business venture with her husband. When it comes to calculation of Ashley Darby net worth, she has garner herself with enough money through her business and her reality series.

As of 2019, Ashley Darby net worth is estimated at around $6 million, and she is going to upsurge it in coming days. While on the other hand, her husband being a real estate millionaire from Australia, owns a company called Monument Realty. He has a jaw-dropping net worth of $20 million.

How tall is Ashley Darby?

Observing her body statistics, Ashley stands a height of 5 feet 8 inches and weighs around 64 kg. Similarly, She has a pair of dark brown eyes and hair colour. Further, her body measures 34C-25-37 inches.