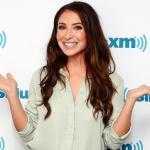 Bristol Sheeran Marie Palin, popularly known as Briston Palin is an American public speaker and reality television personality. She competed in the 2010 season of Dancing with Stars, where she finished in the 3rd place. She returned in the 15th season of the all-star cast of Dancing with the Stars in 2012. She has over 568k followers on her Instagram.

It did not come out as a surprise when Bristol, mother of 3 children decided to leave Teen mom. She felt that Teen Mom wasn't fit for her at all. She wrote on her Instagram,

"teen mom OG wasn’t a fit for me, it took away my peace.. and honestly - my peace has a price tag that no one but God can afford  doesn’t impress me, I don’t entertain bs, and walking away from this show allows God to rebuild me (and my little fam) in the right direction. I have love for all the girls on the show, and wish them the best of luck in all their future endeavors!! xoxo, B"

Though Bristol and her husband are no more together, the two are in good terms. They share 2 daughters together, Sailor and Atlee. She also has a son, Tripp Easton Mitchell Johnston-Palin from her previous relationship with Levi Johnston.

Her former Marine husband, Dakota told in a teen mom special that he and Bristol are in good terms with each other. He also stated that he is not looking forward to new relationships rather he wants to focus his life on his daughters.

What is Bristol Palin Famous For?

- The subject of media attention after becoming pregnant at her teenage.

Where was Bristol Palin Born?

Bristol Palin was born on 18 October 1990. Her birth name is Bristol Sheeran Marie Palin. She was born to a father, Todd Palin, and a mother, Sarah Palin. Her birth place is in Palmer, Alaska in the United States. She holds American nationality. Her zodiac sign is Libra. She grew up in Wasilla.

She became the subject of media attention when her pregnancy was announced during her mother's unsuccessful run for Vice President. She was unmarried at the time.

She appeared on the Today show and Good Morning America in May 2009 in the recognition of the National Day to Prevent Teen Pregnancy. She was just 18-years old then. She called for all teens to abstain from sex.

She was named a Teen Pregnancy Prevention Ambassador for the Candie's Foundation in May 2009. She attended town hall meetings talking about abstinence, public service announcements and giving interviews on morning talk shows.

She was criticized for her sexual abstinence campaign. Some quoted it was not realistic for this generation.

She was paid more than $262,000 by Candie's Foundation for her work in 2009. It constituted 12 percent of the foundation's annual budget and was criticized as excessive.

She reaffirmed her stance on abstinence in July 2011 saying it's not realistic for everyone.

She took to her blog to correct the media in 2015 regarding what the Candies Organization is and her role within it.

The media reported in May 2010 that Palin has signed with the company Single Source Speakers. It was reported that she asked between $15,000 and $30,000 for each appearance. She was listed on the company's website as available for conferences, fundraisers, special events and holidays, as well as women's, youth, abstinence, and pro-life programs.

She was invited to speak by Washington University in St. Louis in January 2011 as the Keynote Speaker for Abstinence in College' at Sexual Responsibility Week. Students protested both the high fee she was to be paid out of student-generated funds and her lack of expertise on abstinence in college. Her appearance was canceled.

She appeared in an episode of the ABC Family network series, The Secret Life of the American Teenager in 2010.

She competed on the 11th season of Dancing with the Stars, where she partnered with professional Mark Ballas. She finished in third place.

She made an appearance on the TLC travelogue-documentary Sarah Palin's Alaska in November 2010. Her docu-series Life's A Tripp premiered on Lifetime TV in June 2012.

She competed on the all-star season 15 of Dancing with the Stars in 2012. She was once again partnered with Mark Balas. They were eliminated in week 4.

She was cast in Teen Mom OG in July 2018 after Farrah Abraham's exit from the show.

She appeared in the music video for an Alaskan symphony rock band Static Cycle.

Her memoir, Not Afraid of Life: My Journey So Far was released in June 2011. The memoir was co-authored by Nancy French. The book reached at number 21 on The New York Times Best Seller list for hardcover nonfiction.

Who is Bristol Palin Married to?

She was pregnant but unmarried in 2008. Her mother Sarah Palin was running for vice president. It was publicly announced on the opening day of the 2008 Republican National Convention on 1 September 2008 that she was pregnant and engaged to Levi Johnston. Levi was the father of her child. Her son with Johnston, Tripp Easton Mitchell Johnston-Palin was born on 27 December 2008. The couple ended their engagement in March 2009.

Palin and Johnston announced in July 2010 that they had reunited and were again engaged. They ended their second engagement less than three weeks later. The couple reached an agreement giving primary custody to Palin, and visitation rights and child support responsibility to Johnston.

Meyer announced in February 2018 that he and Palin and separated and had filed for divorce. She confirmed in August 2018 that their divorce was finalized.

She lives in Anchorage, Alaska.

What are Bristol Palin's Body Measurements?

What is Bristol Palin's Net Worth?

Bristol Palin became a public speaker after she gained media attention after being pregnant at her teenage. She later became a television personality and author. She works working in television shows and from her memoir. She has also used her popularity into business ventures. As of 2019, her net worth is estimated at $500,000.

Trivias About Bristol Palin You Need To Know.