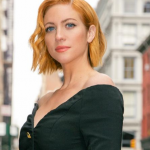 Brittany Anne Snow, excellently known as Brittany Snow is an American actress who is well recognized for starring in the CBS soap opera "Guiding Light" (1998-2001). She played Meg Pryor on "American Dreams" and received a Teens Choice nomination for her performance in the film "Prom Night". She also plays Chloe Beale in "Pitch Perfect", "Pitch Perfect 2" and "Pitch Perfect 3". She started working as a model when she was three for Burdine's newspaper advertisements. Snow is also the co-creator of the Love is Louder movement which is a project by the not-for-profit Jed Foundation. In 2022, she was seen as Bobby-Lynne Parker in a film, "X". Additionally, Brittany will be writing as well as directing the upcoming film, "September 17th".

Where was Brittany Snow born?

Brittany Snow opened her eyes for the very first time on 9th March 1986 in Tampa, Florida, U.S. Her real name is Brittany Anne Snow and her religion is Christian. She is of American nationality and she came from a mixed ethnic background as she is of English, Italian, Scottish, and Swiss-German descent. Brittany's present age is 36 which she celebrated recently in 2022 and as per her birthdate, her zodiac sign is Pisces. Thus, her race is white. She is the daughter of her father,  John Thomas Snow Sr., and her mother, Cindy Joanna Archer Snow. She has a half-brother named, John Snow Jr and a half-sister named Holly Snow.
Moving to Snow's education, she attended Gaither High School in Tampa.

What does Brittany Snow do for a living?

Brittany Snow is a married woman who tied the knot with her ex-husband Tyler Stanaland on 14th March 2020. Tyler is a realtor and pro surfer. The pair got engaged on 19th February 2019. But, the couple's relationship did not last as they got separated after two years of relationship on 14th September 2022. "After time and consideration, Tyler and I have made the difficult decision to separate," "Pitch Perfect" Snow wrote in the caption of her post. She also said that their decision to split "was made with love and mutual respect for one another." Talking about Snow's sexual orientation, she is straight.

Who is Tyler Stanaland?

What is Brittany Snow's net worth?

Brittany Snow is among those few individuals that have such a wide range of experience and remains true to whatever she embarks on. She has a net worth of $9 million as of 2022 whereas her exact amount of salary has not been disclosed yet. She has appeared in a print ad for Burdines as well as she has starred in TV commercials for brands like McDonald’s, Busch Gardens, and Lipton from which Snow earns a fine amount of money. In addition, her major source of income is her acting career.

How tall is Brittany Snow?

Brittany Snow stands at an ideal height of 5 ft 4 in or 163 cm with a balanced body weight of 58 kg or 128 pounds. She has good-looking blonde hair and blue eyes color. Brittany's usual exercise schedule has guided her to be in marvelous body posture with appropriate body measurements. Moreover, her body build type is slim and her body measurements are 36-25-34 in or 91.5-63.5-86 cm.

Trivias About Brittany Snow You Need To Know.