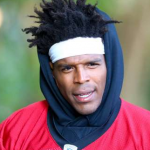 Cameron Jerrell Newton famed as Cam Newton is an American football quarterback for the Carolina Panthers of the National Football League (NFL). Previously, he played college football at Auburn. Later, he was drafted as the first overall pick by the Panthers in the 2011 NFL Draft. In 2015, Newton became the first quarterback in NFL history to throw for at least 30 touchdowns and rush for 10 in the same season (35 passing, 10 rushings). Overall, he is a very talented footballer.

After being released by the Panthers at the end of the 2019 season, he became a free agent. He then signed with the New England Patriots. He played for the Patriots in the 2020 season before being released in August 2021. Newton ultimately returned to his first team, Carolina Panthers. He signed a one-year deal with the Panthers in March 2021.

Panthers' Cam Newton remains in a walking boot, gets treatment

Panthers coach Ron Rivera says he expects injured quarterback Cam Newton to return to practice "pretty soon," without giving a timetable. Rivera remains "cautiously optimistic" that Newton, who remains in a walking boot, will be ready for the Sept. 8 regular-season opener against the Los Angeles Rams. Newton sustained a left mid-foot sprain in Carolina's 10-3 loss to New England on Thursday night. Rivera expressed relief the injury wasn't worse, saying "very much so-he's our starting quarterback." Newton was inside the stadium receiving medical treatment while the team practiced on Saturday. Rivera says trainers want Newton to stay off the foot and keep it elevated as much as possible. Newton hasn't spoken to the media since the injury.

Newton was born on 11th May 1989 in Atlanta, Georgia as the son of Jackie and Cecil Newton Sr. His younger brother of Cecil Newton, Jr., a center who most recently played for the Baltimore Ravens. He became interested in the world of football since his childhood years. He is of American nationality. He belongs to an African-American ethnic background. He attended Westlake High School, Auburn University, University of Florida, and Blinn College. At the  University of Florida, he was a member of the Florida Gators football team in 2007 and 2008. He played in five games, passing for 40 yards on 5-of-10 and rushing 16 times for 103 yards and three touchdowns. In Blinn college, he led his team to the 2009 NJCAA National Football Championship. Similarly, at Auburn University, he led Auburn to a 52-3 victory over Louisiana-Monroe on October 2, 2010. He celebrated his 30th birthday as of 2019.

Newton has a height of 1.96m. Additionally, he weighs 111 kg. Furthermore, his hair color and eye color is black. His other body measurements will be added soon. Overall, he has got a healthy body.

Net Worth of Newton

Newton is a very successful person in his career and he has an average salary of $20,760,000. He has an estimated net worth of around $6 Million as of 2019. He is living a happy life with his earnings.