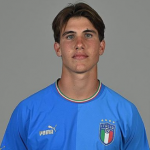 Cesare Casadei is a talented Italian footballer who is well recognized for playing as a midfielder for Inter Milan. His shirt number is 50 and he started his career with Cervia. He moved to Inter Milan in 2018 and quickly established himself in the youth ranks. Cesare was also included in The Guardian's yearly "Next Generation" list in October 2021 after a good start to the 2021-2022 season. He has represented Italy at the youth international level and has been noted for his goalscoring ability while playing for his nation. Moreover, he is also active on social media as he has earned more than 48.3K followers on his Instagram account.

Where is Cesare Casadei from?

Cesare Casadei took birth on 10th January 2003 in Ravenna, Italy. Being born in Italy, he holds Italian nationality and he came from Italian-white ethnic background. Similarly, his religious belief is in the Christian religion and his race is white. Cesare's present age is 19 which he celebrated recently in 2022 and as per his birthdate, his zodiac sign is Capricorn. He has not shared any details regarding his parents however we know that he has a brother named Ettore who is also a footballer and studies at the Old Dominion University in the United States.

Cesare Casadeiis too young to be in a relationship with someone. Being so young, he has not been in any relationship and it seems like he is sharpening his strength and skills to make his all dreams come true rather than being stuck in a relationship. Cesare is single at the present time. Despite his young age, he has a huge fan following and many people love him. Concerning his sexual orientation, he is straight.

What is Cesare Casadei salary?

Cesare Casadei has established himself an identity already in his short professional time. He has a net worth of between $500,000 to $1 million as of 2022 whereas he has also a handsome amount of salary which is around thousands of dollars per year. Cesare's current market value is $1.10m which is also his highest market value as of 23rd June 2022. In addition, his major source of income is his football career and he is sincere in his work.

How tall is Cesare Casadei?

Cesare Casadei is 1.86 m (6 ft 1 in) tall and his body weighs around 62 kg. He has light brown hair and dark brown eyes color. Cesare's got an unconventional good look and raw appeal about him. Moreover, his body build type is athletic.