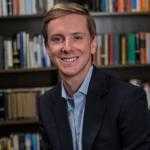 Christopher Hughes, popularly known as Chris Hughes is an American entrepreneur. He co-founded the online social directory and networking site, Facebook with Harvard roommates Mark Zuckerberg, Dustin Moskovitz, Eduardo Saverin, and Andrew McCollum. He also served as spokesman for Facebook. He left Facebook in 2007. He later worked as publisher and editor-in-chief of The New Republic. He is now a co-chair of the Economic Security Project.

What is Chris Huges Famous For?

Where was Chris Hughes born?

Chris Hughes was born on 26 November 1983. His birth name is Christopher Hughes. He was born to a father Arlen "Ray" Hughes, and a mother, Brenda Hughes. His birth place is in Hickory, North Carolina in the United States. He holds American nationality. He has no siblings. He grew up in Hickory, North Carolina. He was raised as an evangelical Lutheran. He attended Phillips Academy in Andover, Massachusetts. After graduating from Phillips, he enrolled at Harvard University. He graduated with a Bachelor of Arts in history and literature from Harvard in 2006.

During his freshman year at Harvard, Zuckerberg met him and recruited him in his team. At the time, Zuckerberg was still working in the early stages of Facebook.

Hughes was unofficially responsible for beta testing and product suggestions for the next two years.

Hughes was the key driver in developing many of Facebook's popular features that helped Facebook to grow worldwide.

After graduating from Harvard, he relocated to Palo Alto to rejoin Zuckerberg and Moskovitz on Facebook.

He was named Entrepreneur in Residence at General Catalyst in March 2009.

UNAIDS appointed him to a 17-member "High-Level Commission" of renowned politicians, business leaders, human rights activists, and scientists in July 2010.

Hughes purchased a majority stake in The New Republic magazine in March 2012.

His tenure at The New Republic was not profitable. He sold the magazine to Oregon publisher Win McCormack in February 2016.

Who is Chris Hughes Married to?

Chris Hughes is a married man. His sexual orientation is gay. He is married to the political director of Freedom to Marry, Sean Eldridge. The couple got engaged in January 2011. They tied a knot to each other on 30 June 2012.

What is Chris Hughes Net Worth?