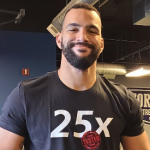 Devin Terrell Clark, professionally known as Devin Clark is an American mixed martial artist. He is well recognized for currently competing in the Light heavyweight division of the Ultimate Fighting Championship. He began boxing as a child and wrestling at the age of seven, continuing to compete in the latter in high school. He also became the South Dakota State Champion at 189 lbs. He was in the team, Team Nak Suk until 2010 after which he was in Next Edge Academy of Martial Arts (2010-2017). He is currently a member of the team, Jackson-Wink MMA which he joined in 2017. Devin was signed by Ultimate Fighting Championship (UFC) after Dana White scouted him on the "Dana White: Looking for a Fight - Season 1 Episode 6" UFC web series. He was a two-time NJCAA All-American at the 184-pounds division for the Yellowjackets as well as he won the National Championship in 2009 and placed 4th in 2010. Pre4sently, he is ranked in #44 Light Heavyweight. Moreover, he faced Azamat Murzakanov on 13th August 2022, at UFC on ESPN 41 and got lost the fight via technical knockout in round three.

What nationality is Devin Clark?

Devin Clark opened his eyes for the very first time on 12th April 1990 in Sioux Falls, South Dakota, United States. His real name is Devin Terrell Clark and his religion is Christian. He is also known by another name "Brown Bear" which his two best friends gave him citing his dual personal characteristics - he has bear-like wrestling and a pleasant, thoughtful demeanor in everyday life. Being born in the U.S, he holds American nationality and belongs to an African-American ethnic background. Devin celebrated his 32nd birthday in 2022 and as per his birthdate, his zodiac sign is Aries. Thus, his race is black. He has not shared any details regarding his parents.
Moving to Devin's education, he attended Rochester Community and Technical College. Later he dropped out of college and quickly moved up and competed in the Resurrection Fighting Alliance. He was a high school state wrestling champion, Junior College National wrestling champion, and an amateur boxer.

Who is Devin Clark's Wife?

Devin Clark is a married man as he tied a knot with his beautiful wife, Megan Farmer-Clark who is a realtor. They both seem extremely happy in their domestic life. Megan's supportive of him and the profession that he is in. There's much love between the two. The pair is also blessed with a daughter named Eden Marie Clark. Talking about Devin's sexual orientation, he is straight.

Furthermore, Ben is also active in helping numerous nonprofit agencies in his community. He is especially involved in advocating for those that have Down Syndrome as well as he was recently appointed to the National Board of Garrett's Fight. He is very vocal in support of Down Syndrome Awareness and Advocacy, and the campaign to save the unborn Down Syndrome child from abortion.

What is the Net Worth of Devin Clark?

Devin Clark is a talented guy who has a net worth of $1.2 million as of 2022 whereas he has also a handsome amount of salary which is around $383,333 per year. He is among those few individuals that have such a wide range of experience and remains true to whatever he embarks on. With his calm and easy-going personality, Devin is expected to get more popular in the coming years. His major source of income is his MMA career.

How much does Devin Clark weigh?

Devin Clark is 6 ft 0 in (1.83 m) and his body weighs around 223 lb (101 kg; 15.9 st). He has got a good-looking haircut which is dark brown whereas his eyes color is light brown. His body build type is athletic. Devin has inked attractive tattoos on his different body parts as his chest's tattoo closely resembles a particular Gaelic-Roman deity named Cernunnos. The deity is usually depicted with big antlers on ancient artifacts.

Besides, during the fight with Ion Cutelaba at UFC Vegas 37, Clark almost didn't make it out for the final round after Cutelaba caught him with a perfectly timed knee late in Round 2. The knee dug right into the side of his cheek and immediately threatened to dislodge Devin's teeth. His corner noticed the injury right away, but after a brief discussion, Clark told his team he could continue. He placed a metal wire in his mouth that served as temporary braces to keep his teeth in place.

Trivias About Devin Clark You Need To Know.