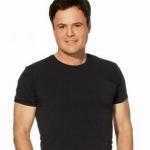 Donald Clark Osmond, popularly known by the name Donny Osmond is an American singer, dancer, actor, and former teen idol. He has also been a talk and game show host, record producer, and author. He rose to prominence as the Osmonds along with four of his elder brothers. He went solo in the early 1970s. He has also gained popularity as Donny & Marie along with his younger sister Marie. He won the 9th season of Dancing with the Stars and was runner-up in the first season of The Masked Singer. 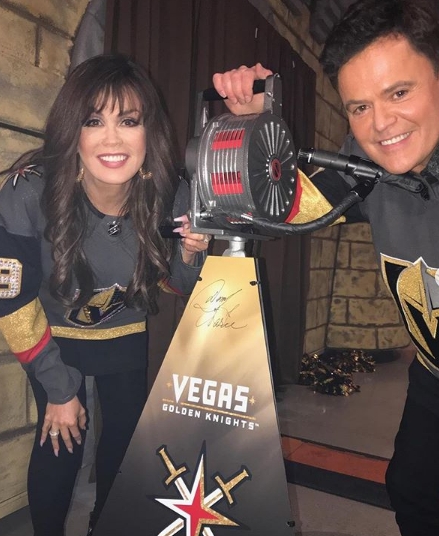 Donny Osmond was born on 9 December 1957. His birth name is Donald Clark Osmond. He was born to a father, George Osmond, and a mother, Olive May. He belongs to White ethnicity. His birthplace is in Ogden, Utah in the United States. He holds American nationality. He follows Christianity. His zodiac sign is Sagittarius. He has 8 siblings. He has 7 older brothers, Alan, Jay, Jimmy, Merril, Wayne, Tom, and Virl and a younger sister, Marie.

He was raised as a member of The Church of Jesus Christ of Latter-day Saints in Utah along with his siblings.

He held a ham radio license, KA7EVD in his youth.

The Osmond Brothers, Alan, Wayne, Merrill, and Jay was performing on Disneyland television special as a barbershop quartet. Jay Emerson Williams saw their performance and invited the Osmond brothers to audition for The Andy Williams Show.

The Osmond brothers soon became the asset to the program and became regular on the show.

The Osmond brothers gained popularity in a short period of time.

Donny Osmond made his debut on the show singing "You Are My Sunshine" in 1963. He was 5 years old at the time.

The brothers continued to perform on the show throughout the 1960s.

Osmond became the teen idol in the early 1970s as a solo singer. He also continued to sing with his older brothers.

His solo cover of Roy Orbison's "Sweet and Innocent" became his major hit then.

His popularity became international after appearing on the Here's Lucy show in November 1972.

His popularity continued to grow through the 1980s as well. "Soldier of Love" and "Sacred Emotion" were some of his hit songs during the late 1980s.

He was the guest vocalist on Dweezil Zappa's star-studded version of the Bee Gees' "Stayin' Alive". The song appeared on Zappa's 1991 album, Confessions.

He sang "No One Has To Be Alone" for the film The Land Before Time IX: Journey to Big Water and "I'll Make a Man Out of You" for Disney film, Mulan.

He released a Christmas album in the 2000s. The album consisted of his favorite Broadway songs and a compilation of popular love songs.

Following his sister, Marie's popularity after Dancing with the Stars in 2007, they teamed up for a limited engagement in Las Vegas at the MGM Grand Las Vegas.

They started playing as "Donny & Marie". They sing together at the beginning and end of the show and also has solo segments in between.

The old style showroom was updated in 2014 and renamed the Donny and Marie Theater.

Their show earned the siblings three of the Las Vegas Review-Journal's Best of Las Vegas Awards in 2012 including "Best Show", "Best All-Around Performer", and "Best Singer". He later won "Best Singer" award for the second time in 2013.

He and his sister, Marie co-hosted The Mike Douglas Show for a week in 1974.

The two siblings also co-hosted a talk show together 20 years later. They were nominated for an Emmy Award for the best talk show.

He hosted Pyramid, a syndicated version of the Dick Clark-hosted television game show from 2002 to 2004. He also hosted the British version of Pyramid on Challenge in 2007.

He returned to ABC hosting the Great American Dream Vote in 2007. But the show was canceled after two episodes due to low ratings.

He hosted the British version of the game show, Identity on BBC Two.

He has also hosted the 2008 Miss USA pageant along with his sister Marie.

He appeared on Entertainment Tonight as a commentator covering the 5th season of ABC show, Dancing with the Stars in 2007. His sister, Marie was a contestant at the show.

He hosts a syndicated radio show in a deal with McVay Syndication and Citadel Media. The versions of his radio show air across the United States, Canada, Australia, and the UK.

Blue Revolution co-produces the UK version of his radio show, broadcasted by The Breeze.

The Donny Osmond Show is no longer broadcasting on The Breeze as of January 2012.

He made his Broadway musical debut in the lead role in a revival of the 1904 George M. Cohan show, Little Johnny Jones.

He achieved success in musical theater throughout the 1990s starring as Joseph in Joseph and the Amazing Technicolor Dreamcoat. The show had 2,000 performances.

He left his starring role to participate with his family n the cast of the Hill Cumorah Pageant.

He and his sister starred in a holiday production, Donny & Marie- A Broadway Christmas between December 2010 and December 2011. They later performed a similar Broadway show in December 2014.

He voiced himself as a recurring character in the animated television series, Johnny Bravo.

He has also appeared as guest artists on numerous television shows including Friends, Diagnosis: Murder, and Hannah Montana.

He co-starred with Priscilla Barnes and Joan Collins in the television movie, The Wild Women of Chastity Gulch in 1982.

He appeared in Goin' Coconuts with his sister in 1978.

He was chosen as the singing voice of Shang in Disney's Mulan in 1978, where he sang "I'll Make a Man Out of You".

He starred as Joseph in the movie version of Joseph and the Amazing Technicolor Dreamcoat in 1999.

He played Jackaroo the pickup truck in the Bob the Builder special "Built to be Wild".

He finished in the runner-up place in an American reality singing competition television series, The Masked Singer in February 2019.

Dancing with the Stars

He appeared as a contestant in the 9th season of Dancing with the Stars in 2009. He was paired with professional dancer Kym Johnson.

In the end, he finished the show as the winner.

He guests judged week five of season 18 of Disney Night.

He guest judged the 12th series of the British version of the show, Strictly Come Dancing.

Who is Donny Osmond Married to? 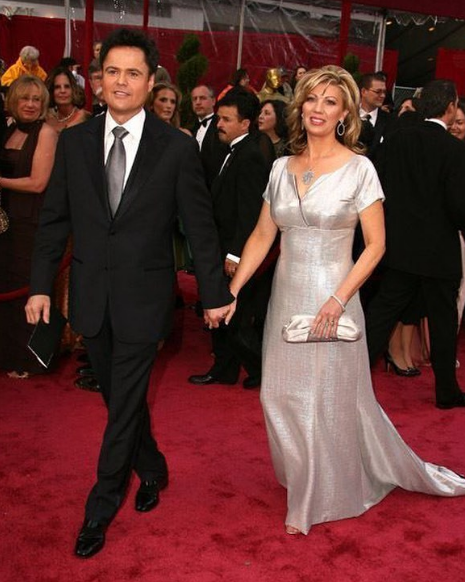 Osmond is a married man. His sexual orientation is straight. He is married to Debra Gleen. The couple tied a knot to each other in the Salt Lake Temple on 8 May 1978. He was only 20 years old at the time. The couple has five sons. They are Donald Clark Osmond, Jr., Jeremy James Osmond, Brandon Michael Osmond, Christopher Glenn Osmond, and Joshua Davis Osmond.

He became a grandfather in 2005 and now has multiple grandchildren.

What are Donny Osmond's Body Measurements?

How much is Donny Osmond net worth?

Donny Osmond has earned his fortune working in the entertainment industry. He started his career with the help of his older brothers as the Osmonds gained popularity in the early 1970s. He has later established himself as a successful singer, dancer, actor, talk show host, game show host, record producer, and author. He has appeared in a Pepsi Twist commercial during the Super Bowl along with his sister Marie, and Ozzy and Sharon Osbourne. As of 2019, the net worth of this complete entertainer is estimated at $18 million.