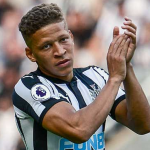 Dwight Devon Boyd Gayle is a professional footballer who plays as a striker for West Bromwich Albion of the Championship, on loan from Premier League club Newcastle United who played by wearing shirt number 16.

On 6th August 2018, he joined West Bromwich Albion on a season-long loan deal from Newcastle.

On 17th October 1989, Dwight was born in Walthamstow, England. His nationality is English.

Net worth of Gayle

Dwight is not married yet but he is in a relationship with Stefanie Lianne. The couple is living a happy life.