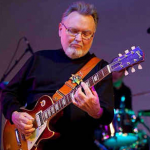 Edward Calhoun King simply named as "Ed King" was an American musician as well as guitarist for the psychedelic rock band Strawberry Alarm Clock and bassist for the Southern rock band Lynyrd Skynyrd from 1972 to 1975 and again from 1987 to 1996.

Ed left this world on 22nd August 2018 aged 68. the cause of his death was lung cancer. He died in Nashville, Tennessee home.

On 14th September 1949, Ed was born with the birth name of Edward Calhoun King. He was born in Glendale, California the city of U.S. His nationality is American. His star sign is Virgo.

Net Worth of Ed

An American Musician, King has got an estimated net worth of $10 Million. The salary of Ed is still under review and will be updated soon.

Ed is a married man. He married Sharon Brock. They were living happily together.

Trivias About Ed King You Need To Know.