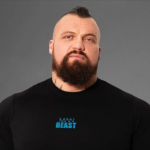 Edward Stephen Hall is a British former professional strongman who is excellently known as Eddie Hall. He is well recognized for being the World's Strongest Man 2017 competition. He has also won the UK's Strongest Man and England's Strongest Man competitions multiple times. He was named the UK's Strongest Man in the 2011 competition. Hall also made his theatrical film debut in the horror flick, "Rotten Cotton" released in 2018. Besides the broadcast of the strongman competitions, he made his first TV show appearance in the TV series "Keep It in the Family" in 2015. Previously, Hall worked as a mechanic in the garage at the Robert Wiseman Dairies site in Market Drayton, Shropshire in 2008 and he trained and competed as a bodybuilder and entered the strongman circuit, having done a strongman competition at the Iceman gym in Stoke-on-Trent, Staffordshire. Additionally, Eddie faced the World's Strongest Man 2018, Hafpor Julius Bjornsson, in an exhibition boxing match in Dubai on 19th March 2022 however, he lost via unanimous decision with all three judges scoring the bout 57-54 in favor of Hafpor.

Where is Eddie Hall from?

Eddie Hall opened his eyes for the very first time on 15th January 1988 in Newcastle-under-Lyme, Staffordshire, England. He was born with the real name of Edward Stephen Hall in a Christian religious family. He holds British nationality and he came from British-white ethnic background. Eddie has celebrated his 34th birthday as of 2022 and as per his birthdate, his zodiac sign is Capricorn. Thus, his race is white. His parents' details have not been revealed yet.

Who is Eddie Hall is married to?

Eddie Hall is a married man. He was married to Alexandra Hall and became a father of two children. It seems that he is comfortable keeping his personal life open to the public. It shows how he loves his fans and leaves no page unturned to make them know what they want. Apparently, Hall has a very good relationship with his family and is going very strong to date. Reflecting on his sexual orientation, he is straight.

Eddie Hall is a strong man who has a net worth of $35 million as of 2022. He also earns a fine amount of salary which is around $100,000 per year. Hall has also used his strong presence on social media platforms to promote fitness and health-related products. He occasionally posts about other products as well from where he gains a considerable amount of money. In addition, his major source of income is from his professional strongman career.

Eddie Hall stands at a tall height of 6 ft 3 in or 191 cm and his body weighs around 186 kg or 410 lbs. He has dark brown hair and eyes color. His body build type is large. Eddie also has inked several tattoos on his body which has attracted a lot of people towards him. Moreover, he works almost daily at the Strength Asylum in Stoke. He trains just like a bodybuilder and has broken down his workout routine into splits, focusing on the chest, legs, cardio, back, and shoulders for each day of the week. He has also included event-specific moves in his workout routines to make sure that he builds his functional strength as well.

Trivias About Eddie Hall You Need To Know.