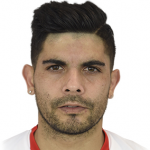 Facts About Ever Banega

Argentine soccer player Ever Banega is currently playing as a midfielder for National Team of Argentina and La Liga club Sevilla FC. Before heading to Sevilla in 2017, he played for Boca Juniors, Valencia, Atletico Madrid, and Internazionale. Marcelo Simonian is the agent of Ever Banega. He is the member of the Boca Juniors that won 2007 Copa Libertadores.

What is Ever Banega known for?

Where is Ever Banega grew up?

Ever Banega was born in Rosario, Argentina as Ever Maximiliano David Banega. His birth sign is Cancer. Reviewing his nationality, Banega is an Argentine. His nickname is Ever.

Banega was born to his father Daniel Banega and to his relatively unknown mother and grew up with his four brothers named Luciano, Cesar, Emiliano, and Brian. There is no information about his education details. In the case of disclosed, we will let you know.

When did Ever Banega pursue his football career?

To whom Ever Banega Married?

Reflecting his personal life, Ever Banega is married to his wife, Valeria Juan on May 13, 2016. The couple blessed with two daughters and one son. Their two daughter names are Romanella and Agostini. However, their son name was not disclosed in the media. He is often seen enjoying his holidays on the world’s some of the most expensive destinations. As of now, the pair live a blissful life with their children. There is no rumor to divorce at all.

How much net worth Ever Banega accumulated?

Ever Banega uses the shoe model of Nike Magista Obra II since 15th May 2018. Back in 2016, he had an estimated market value of £18 million and his current market value is estimated to be around £10.80 million. He is the ambassador of Nike.

While Banega was in an Internazionale, Ever Banega was the highest paid player brought in the summer with €3 million per year.

What is the body statistics of Ever Banega?

Observing his body figure, Banega stands at a height of 5 ft 8½ inches tall i.e. (1.74m) and weighs around 72 kg. Similarly, He has a pair of brown eyes and black hair color. His body measure 40-14.5-32 inches including chest, biceps, and waist sizes. Further, his shoe size is unknown.