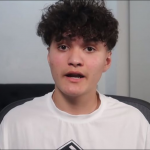 Faze Jarvis is a 17-year-old professional gamer and entertainer who has managed to earn great popularity by playing the game, Fortnite. Jarvis is one of the largest Fortnite creators in the community, with 3 million fans between YouTube and other social media platforms. Jarvis is the brother of FaZe Kay, director of popular Call Of Duty gaming group. Recently on November 3, 2019, Jarvis was banned from playing Fortnite for using aimbot by the Fortnite maker, Epic Games.

What is Faze Jarvis  Famous for?

Where is Faze Jarvis From?

Faze Jarvis was born on November 11, 2001, in England, United Kingdom. His birth name is Jarvis Khattri. His nationality is British. Jarvis belongs to White ethnicity while Scorpio is his zodiac sign.

Jarvis was raised in his hometown along with his three brothers, Faze Kay, Chandler, and Jay. His older brother, Faze is also a professional gamer and one of the directors of the gaming group, "Faze Clan".

Why is Faze Jarvis Banned from Fortnite Game?

Faze Jarvis began his career in Youtube following the path of his older brother, Faze Kay after Kay started featuring Jarvis in his videos. Jarvis continued his passion to play Fortnite all day and night to entertain his fans and followers.

Jarvis is a member of the eSports team, "FaZe Clan". The team was founded in 2010 by his brother and other members. Jarvis had an up growing career in his game of Fortnight but unfortunately, he won't be able to continue it as he has been permanently banned by the makers of Fortnight, EpicGames.

On November 4, 2019, Jarvis uploaded his latest video which was unusual as it was an apology video where he appeared devastated claiming of being banned from Fortnight for life.

EpicGames banned Jarvis for his mistake of using aimbot(a cheating mechanism) while playing one of the games which was against the rules of games. Epic gave Jarvis a hardware and Internet provider ban such that he is effectively locked out of the game and won't be able to play the game ever.

Jarvis pleaded guilty for not knowing the coming consequences of his action by using aimbot in the game going against the rules. He has said that he was using it just for entertainment and is sad for doing so.

Who is Faze Jarvis Dating?

What is the net worth of Faze Jarvis?

The Youtuber Faze Jarvis had quite a good income from his ongoing career as a gamer of Fortnight. Jarvis's net worth isn't disclosed yet. While his brother, Faze Kay, who is also a gamer has an estimated net worth of $1 million.