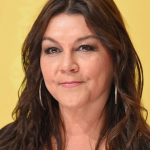 An American Country music Artist is known as Gretchen Frances Wilson. She is simply popular as Gretchen Wilson. She made her debut with the Grammy Award-winning single "Redneck Woman" on March 2004. Her single was number one hit on the Billboard country charts. Then she continued with songs. By profession, she is an actress, singer, musician, and songwriter.

On 21st August 2018, she was arrested for the breach of peace at Bradley International Airport in Windsor Locks.

Gretchen Wilson opened her eyes for the first time on 26th June 1973. She was born in Pocahontas, Illinois, the U.S. Her real name is Gretchen Frances Wilson. She belongs to American nationality. Her sun sign is Cancer. Her ethnicity is White.

45 years, Wilson has got the great body. She manages to keep her body very sexy and attractive. This attractive singer has got the height of 170 cm and weight of 55 Kg. Her eye color is Light Brown and hair color is Dark Brown. Her shoe size is 9 (US).

Net Worth of Gretchen

The net worth of Gretchen is estimated to have $4 Million as of 2018. Her salary is still to figure out and will update soon.

Wilson is a married woman. She was married to Mike Penner and the couple was also blessed with a daughter named Grace Frances Penner. Later, the couple got separated.

Trivias About Gretchen Wilson You Need To Know.