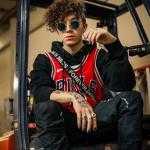 Jack Avery is an American multi-star who has been able to gain enormous success and fame in early life. He is a pop singer, songwriter, musician, actor, and Instagram star. Avery is one-fifth of the boy band "Why Don't We"(WDW).

The 19-year-old Jack is a youngster from California who started his career posting his songs and covers on social media: Instagram, Youtube and showcasing his skills in playing instruments like piano and guitar. He has already garnered over 1.8 million followers on his Instagram as of May 2019.

What is Jack Avery Famous For?

- His performance in the short film, "Fearless Five" alongside Alex Lee.

Who are Jack Avery's Parents and Family?

Jack was born to John Avery(father) and Kristin Stanford(mother). His father John Avery tries to avoid publicity and its not even sure if his parents are still married.

Jack Avery is the second oldest child of his parents. He has three siblings sisters the oldest sister Sydnie Avery(1995), younger sister Isla Stanford(2004), and the youngest sister Ava Stanford(2008) as his family members.

Jack's father, John Avery is an inseparable part of his life as he was the one who introduced Jack to the music and taught him to play piano in his younger days. While his mother Kristin Stanford has helped him to pursue his career as a musician and works as Jack's manager as well.

How was Jack Avery's Early Life?

Jack Robert Avery is a native of Burbank, California while he grew up in Susquehanna, Pennsylvania as his family moved to a small town in Pennsylvania when Jack was a toddler: 1 year old.

He attended Susquehanna Community High School at Pennsylvania where he used to play basketball.

As a kid, he wasn’t serious about his musical career as much and was mostly inclined towards playing basketball in his school and his backyard. Basketball was in his first place but somehow, down the line, as he grew as a teenager,  his interest in music started growing and he started using social media as an effective tool to showcase his talent.

Jack's curiosity for music and inspiration from his father, John Avery, became a triggering effect for his career in music.

Jack Avery started his career in music first by sharing song covers on social media. At an early age of 17, he was acknowledged by some reputed talent management companies which led him to get the chance of being a part of Impact Tour in 2016.

The tour served young and talented musicians like Jack and helped them gain exposure in public eyes to help them in making a career in music.

Avery launched his self-titled YouTube channel on February 2014 where he uploaded his first video cover "High Tide or Low Tide" of Bob Marley. His other popular songs covered "Heartbreak Hotel", "Thinking Out Loud" and "Photograph". His Channel has  205K+ subscribers and 6.8+million views.

Avery also has released a solo single named "Liar" which was a praiseworthy song piece for the critics. With the exposure he was gaining, Jack was seen in the red carpet of "Teen Choice Awards" in 2015 and 2016.

Avery was slowing being known by the public on social media and soon Jack got in touch with some fellow musicians; Daniel Seavey, Zach Herron, Corbyn Besson, and Jonah Marais who shared the same aspiration as he did. As a matter of fact, Jack and all these youngsters decided to come together in 2016 and formed a pop band named "Why Don't We" and immediately became a sensation.

The WDW band with the R&B music genre came up with an album named "Only The Beginning" released on November 2016. The band released 4 more EPs in 2017: "Something Different", "Why Don't We", "Invitation", and "A Why Don't We Christmas". Their 2017 single "These Girls" became a hit, peaking at #4 on the Billboard Hot 100 chart.

Their debut studio album, "8 Letters" was released on August 2018 which charted at #9 on the Billboard 200 and sold more than 37,000 copies in the US. The album was supported by the singles "Hooked", "Talk", and "8 Letters". Since their debut, WDW has drawn a comparison to "One Direction".

They were even nominated for an MTV Europe Music Awards in 2018 in the "Best Push" category. Due to this, they began touring around the country in 18 states. They had this long tour due to their audiences praising their style which mixed R&B with Soul genre, which was different than most youngsters were doing then.

This helped them to catch the attention of a big music label called Atlantic Recording Corporation to represent them.

Jack also made headlines on an 18th national tour in 2016, and 2017 with his band ‘Why Don’t We.' Jack's vocals and songwriting skills have been a great contribution to the band.

Who is Jack Avery Dating?

Jack Avery has just turned to be a father first time at the tender age of 19. On April 22, 2019, Jack welcomed the cute baby daughter Lavender May Avery, with his girlfriend Gabriela Gonzalez.

Gabriela Gonzalez is an Instagram star, and an aspiring surfer. They started dating in early 2018, and although their relationships were not smooth, they managed to keep their love. Now Jack names Gabbie as the dearest person in his life.  And on May 12, 2019, on mother's day, Avery took the opportunity to appreciate the mother of the baby, Gabriela Gonzalez.

Jack's nationality is American and ethnicity is White Caucasian with Cancer as his Star Sign(Zodiac sign). Besides music, he was also a keen interest in acting. As a matter of fact, Jack intends to do acting. He has already appeared in a short film titled ‘Fearless Five’.  Avery has several cool tattoos on his arms depicting woman's face tattoo which was made in Australia.

What is Jack's Net Worth?

Jack Avery has an estimated net worth of $300K USD. Jack earns money as a musical artist through his live performances, tours, music sales, and YouTube ads. Jack also sells "Work until you no longer have to introduce yourself" T-shirts via his online store.

How Tall is Jack Avery?

Jack has a fair complexion with blue eyes and dark brown curly hair.

Trivias About Jack Avery You Need To Know.