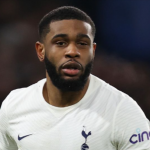 Japhet Manzambi Tanganga is an English professional footballer who is excellently known as Japhet Tanganga. He is well recognized for playing as a defender for Premier League club Tottenham Hotspur. He started his soccer career at a young age playing for Tottenham's youth club from 2009 to 2019. He was signed by Tottenham Hotspur in 2019. Japhet made his professional club debut on 26th November 2020 playing against the Ludogorets Razgrad football club during a UEFA Europa League match. Also, he has made appearances as a member of England's national soccer team. Moreover, he was ruled out for the remainder of the 2021-2022 season after he suffered a knee injury on the 24th of January 2022 in a 2-0 loss to Chelsea.

Where is Japhet Tanganga from?

Japhet Tanganga opened his eyes for the very first time on 31st March 1999 in Hackney, England. He was born with the real name of Japhet Manzambi Tanganga in a Christian religious family. He is British by nationality and Congolese by ethnicity. Tanganga's present age is 23 which he celebrated recently in 2022 and as per his birthdate, his zodiac sign is Aries. Thus, his race is black. He has not shared any information regarding his parents however we know that he has three siblings.
Moving to Japhet's education, he went on to attend Greig City Academy and at the age of 10 joined the Tottenham Hotspur youth academy.

Who does Japhet Tanganga play for?

Japhet Tanganga remains relatively quiet when it comes to sharing his private life and makes it a point to stay out of the public eye. He is a guy who is focused on his career and is chasing his dreams. He is also a young man to get married yet. So we can surely assume that Japhet is content with being single at the moment. Furthermore, talking about his sexual orientation, he is straight.

How much is Japhet Tanganga Net Worth?

Japhet Tanganga is a talented man who has a net worth of $1.5 million as of 2022. He also earns a fine amount of salary which is around £1,200,000 per year. His current market value is $13.20m whereas his highest market value is $16.50m as of 5th October 2021. With his calm and easy-going personality, Japhet is expected to get more popular in the coming years. In addition, his major source of income is his football career.

How tall is Japhet Tanganga?

Japhet Tanganga is a handsome man who stands at a tall height of 6 ft 0 in (1.84 m) with a balanced body weight of 83 kg. He definitely has emerged as another teen sensation in the scene. Japhet has short black hair and dark brown eyes color. Besides, his body build type is athletic.

Trivias About Japhet Tanganga You Need To Know.