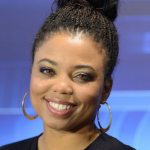 Jemele Juanita Hill is professionally known as Jemele Hill is an American sports journalist currently working ESPN's website The Undefeated. Earlier, she was a column writer for ESPN.com's Page 2. She also hosted ESPN's His and Hers and co-hosted SC6, the 6 p.m edition of ESPN's flagship SportsCenter. She has won NABJ Journalist of the Year and nominated to various other awards.

Jemele Hill was born to a father Jerel Brickerson and a mother Denise Dennard on December 21, 1975 in Detroit, Michigan, United States. Hill and her mother moved to Houston in 1980 and eventually returned to Detroit. Hill completed her schooling from Mumford High School in 1993. And she graduated from Michigan State University in 1997.

Newspaper: Hill's career began with newspaper Raleigh News & Observer as a general assignment sports writer. Later she served as a sports writer for Detroit Free Press from 1999 to 2005. She covered mainly Michigan State Football and basketball. Hill also got a chance to cover NBA Playoffs and Summer Olympics 2004. Hill then worked as a columnist for the Orlando Sentinel from 2005 to 2006.ESPN: In November 2006, Hill got associated with ESPN. She started working there as national columnist on ESPN.com. Hill started to appear on television as well. She mostly appeared on Sportsenter and several other ESPN programs such as ESPN First Take, Outside the Lines and The Sports Reporters. To cover more grounds during 2012 college football season, she worked on Friday nights as a sideline reporter alongside Carter Blackburn and Rod Gilmore. Hill once wrote in her column: "Rooting for the Celtics is like saying Hitler was a victim. It's like hoping Gorbachev would get to the blinking red button before Reagan." regarding why she could not support the Celtics in a 2008 NBA Playoffs match between Boston Celtics and the Detroit Pistons. This created negative response from the readers. For which, that portion of the editorial was deleted shortly after column was published, Hill was suspended for one week. She also issued an apology through ESPN. Later, former Notre Dame football coach Lou Holtz also made a Hitler reference in 2008. But he wasnot suspended and
the network was criticised for the suspension charged to Hill.

Hill and Michael Smith in 2011 began the podcast His & Hers. It hot popular in a short period of time leading Hill to be added to Smith's ESPN2 show Numbers Never Lie in 2013. A year later the show Numbers Never Lie was renamed to His & Hers. Prior to sports coverage, the show also covered social and relationship issues and pop culture, including favorite television shows, music and several movie spoofs. His & Hers ran through January 2017.

Hill and Smith became evening anchors of ESPN's flagship show, SportsCenter on February 6, 2017. The show aired at 6 p.m. The installment of SportsCenter is called "SC6 with Michael and Jemele". But their rating went lower after Hill and Smith took over the rebranded SC6. On September 11, 2017 Hill made a series of tweets about President Donald Trump. She described Trump as a "white supremacist". ESPN issued a official statement saying Hill's comment was inappropriate but doesnot represent ESPN. Hills didnot apologised and claimed it was a representation of her personal beliefs. Trump criticised the network and demanded an apology from the network and Hill to be fired. ESPN suspended Hill for two weeks on October 9, 2017 for a "second violation of our social media guidelines". Three months later, ESPN announced that February 2 SC6 would be Hill's final episode and will be working there with a new role at The Undefeated. It is the company's website that covers the intersections
of sports and race.

Hill was awarded with Inaugural Mckenzie Cup in 2007 in honor of sports editor Van Mckenzie at the annual Poynter Media Summit. Hill was also named Journalist of the year 2018 by the National Association of Black Journalists in recognition of "a distinguished body of work with extraordinary depthm scope and significance to the people of the African Diaspora."

Trivias About Jemele Hill You Need To Know.