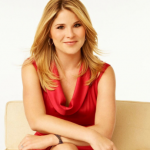 Jenna Bush Hager is an American news personality, teacher's aide, author, and journalist. She is the younger of the sororal twin daughters of the 43rd U.S. President George W. Bush and former First Lady Laura Bush. She became an author, serves as an editor-at-large for Southern Living magazine after her father's presidency. She also became a television personality on NBC, being featured most prominently as a member of The Today Show as a correspondent.

What is Jenna Bush Hager famous for?

Jenna Bush Hager is pregnant with her third child, the Today co-host revealed live on air Monday morning, shocking colleague Craig Melvin. "I'm pregnant," she confirmed out loud. "I'm only telling because Mila and Poppy found out yesterday in their Easter baskets.

It sounds like the soon-to-be big sisters, 6 and 3 years old, took the news well. "They told the man behind me on the airplane. They told the people at church," Hager quipped of her two daughters with the husband of more than a decade, Henry Hager.

During the fourth hour of Today, Hager, who is more than 5 months along, also shared she's having a boy after opening a box filled with blue balloons.

"We weren't really trying to get pregnant. We had some fertility issues with Poppy, so we just, you know it was a date night," she told temporary co-host, Meredith Vieira. "Sorry, mom."

Hager added, "It's a little bit of a shock, but it's such great news."

Congratulations to the future family of five!

Where is Jenna Bush Hager born?

Jenna was born twins with her sister Barbara Bush and, they were the first twin babies of U.S President. Unlike the early lifestyle of other celebrities, Jenna was raised in the family with a good financial condition along with well-educated members.

She was arrested twice for alcohol-related charges just within 5 weeks and, also, was charged for using her paternal grandmother’s ID to buy alcohol.

During her times in Dallas, She joined Preston Hollow Elementary School followed by The Hockaday School. After her father was appointed as Governor of Texas in 1994, she along with her family moved to Austin, Texas and continued her further studies in Austin High School from where she graduated in 2000. After her graduation, she applied for the University of Texas at Austin for the purpose of majoring in English and later, also took some classes at New York University.

When did Jenna Bush Hager pursue her political career?

To whom Jenna Bush Hager married?

Bush to marry his daughter before proposing Jenna. Because of high profile family members in both Jenna and Henry’s family, they first made their love life public on the occasion of dinner at White House. Now, they have two children Margaret Laura Hager and Poppy Louise Hager as a sign of their marital life.

How much is Jenna Bush Hager net worth?

Jenna is a multitalented personality working as a teacher, author, and a news correspondent. She has amassed colossal net worth; all thanks to her devotion to work. According to some online sources, her net worth is estimated to be $4 million as of 2019. However, her salary was not disclosed yet. in the case of disclosed, we will let you know.

How tall is Jenna Bush Hager?

Observing her body physics, She has a height of 5 feet 8 inches and also has a good looking body. Her body weighs 55 kg. Similarly, She has blonde hair and brown eyes. Her physique is considered to be hot by many and her measurements read 34-26-35 inches (Breast- Waist- Hip). Although there are not any exposed pictures of her on the internet, still one can see pictures where she has revealed a little of herself. You can also find many of her pictures on her Instagram account. She also has a twitter page, where you can stay updated with all of her latest news and activities.