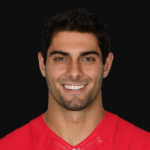 One of the famous American football player is Jimmy Garoppolo. He plays for the San Francisco 49ers National Football League as a quarterback. He is one of the best quarterback player. He is best known for breaking Tony Romo’s school records in American Football. Because of his skills and his focus towards his career, he has won many titles and trophy, super bowl championship, Walter Payton Award, and more on his journey in American football.

Jimmy Garoppolo was born on 2nd November 1991. His birthplace is Arlington Heights, Illinois. Jimmy Garoppolo real name is Jimmy Richard Garoppolo. His parent's name is Denise and Tony Garoppolo.  Jimmy Garoppolo went to Rolling Meadows High School. The high school was in Rolling Meadows. He plays as a quarterback and lines back for Mustang football team. He played his junior and senior seasons in 19 games at quarterback. His horoscope is Scorpio and his ethnicity is White. Talking about his family, he has small and happy members. He lives along with his parents and with his three brothers.

Jimmy Garoppolo height is 1.88 m and weight is 102 kg. He eyes color is Hazel and hair color is of Light Brown. He has the healthy and balanced body. He has got a very sexy figure with a cool attitude and smart smile which attracts a lot of fans towards him.

Jimmy Garoppolo is not married. But he is in a relationship with his girlfriend named Alexandra Rose King. They started dating each other in 2018. They both have good mutual understanding and love for each other. They are living a very happy and peaceful life.