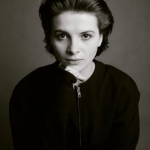 Juliette Binoche is a French actress, artist, and dancer who has appeared in more than sixty feature films and has been the recipient of numerous accolades, including an Academy Award, a British Academy Film Award, a Silver Bear, a Cannes Film Festival Award, Volpi Cup and a César Award. At the age of 17, she directed and starred in a student production of the Eugène Ionesco play, Exit the King. She made her first TV show appearance in the three-part TF1 television series "Dorothée, danseuse de corde" (1983). She made her first feature-film debut in a minor role in the drama film "Liberty Belle" (1983). At that time, her role required only 2 days of filming onset but it was encouraging enough to inspire her more to pursue a career in acting. She has been cast in the films of such notable auteur directors as Jean-Luc Godard ("Hail Mary", 1985), Jacques Doillon ("Family Life", 1985), and André Téchiné; the latter would make her a star in France with the leading role in his drama "Rendez-vous" (1985). Her English-language film debut "The Unbearable Lightness of Being" (1988), launched her to international prominence. She also appeared in the role in Krzysztof Kieślowski's Three Colours: Blue (1993). She garnered further international acclaim with Anthony Minghella's period romance "The English Patient" (1996), for which she won the Academy Award for Best Supporting Actress. Often referred to as "La Binoche" by the press, her other notable performances include Mauvais Sang (1986), Les Amants du Pont-Neuf (1991), Damage (1992), The Horseman on the Roof (1995), Code Unknown (2000), Caché (2005), Breaking and Entering (2006), Flight of the Red Balloon (2007), Camille Claudel 1915 (2013), Clouds of Sils Maria (2014), and High Life (2018). Aside from landing a career in the movie industry, she has also frequently performed on stage both as an actress and as a dancer, internationally. She had been recognized internationally as an A-list movie star during the early 2000s with her onscreen character portraying a somewhat fixed persona.

What is Juliette Binoche Famous For?

Who are Juliette Binoche Parents?

Juliette Binoche was born on 9th March 1964 in Paris, France. He holds French nationality and his ethnicity is Multiracial (White and Latino). She has French, Belgian, Polish, and Portuguese-Brazilian ancestry. Her father, Late. Jean-Marie Binoche was a director whereas her mother, Monique Yvette Stalens used to be a teacher. She has a sister, Marion Stalens. When Juliette was 4 years old, her parents got separated via divorce. She went to the Conservatoire National Supérieur d’Art Dramatique (CNSAD) to study acting. Her present age is 58 as of 2022.

Who is Juliette Binoche's Husband?

How much is Juliette Binoche's Net Worth?

Juliette Binoche is an actress, artist, and dancer whose net worth is estimated to have $20 Million as of 2022. Her salary is in the range of $500K-$1 Million at present. Between 1995 and 2000, she was the advertising face of the Lancôme perfume Poème, her image adorning print campaigns photographed by Richard Avedon, and a television advertising campaign. Her main source of wealth comes from the entertainment industry and she is living a lavish lifestyle at present.

How tall is Juliette Binoche?

Juliette Binoche stands at the perfect height of 5 feet 6 inches. Her body weight consists of 57 kg. Her body measurement is 34-25-34 inches. She wears a dress size of 6 (US) and a shoe size of 8 (US). She has brown eyes and her hair color is dark brown.

Trivias About Juliette Binoche You Need To Know.