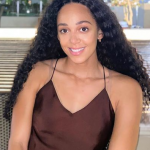 Katarina Johnson-Thompson is an English heptathlete who gained fame for winning the gold medal at the 2019 World Championships and breaking the British record with a score of 6,981 points. She is professionally known as Katarina Johnson-Thompson. She finished 15th in the heptathlon at the 2012 Olympics. Katarina also holds the British record of 5,000 points for the women's pentathlon and won gold in that event at the 2015 and 2019 European Indoor Championships. As well, she won the heptathlon at the 2022 Commonwealth Games in Birmingham, England. Besides, she has also earned a lovely fan base on her social media account as she has gained more than 242K followers on her Instagram account and over 148.3K followers on her Twitter account.

Where was Katarina Johnson-Thompson born?

Katarina Johnson-Thompson opened her eyes for the very first time on 9th January 1993 in Liverpool, England. Her real name is Katarina Mary Johnson-Thompson and her religion is Christian. Being born in England, she holds British nationality and she belongs to the British-white ethnicity. Katarina's present age is 29 which she celebrated recently in 2022 and as per her birthdate, her star sign is Capricorn. She is the daughter of her mother, Tracey Johnson, and her father, Ricardo Thompson (who died in November 2017). Katarina's mother is a former dancer from Liverpool, while her father was a production assistant for ZNS-TV in the Bahamas.
Talking about Katarina's education, she attended St Mark's Catholic Primary School and became interested in athletics. She later returned to Woolton, where she attended St Julie's Catholic High School. Then she went on to study sports science at Liverpool John Moores University.

Katarina Johnson-Thompson is in a romantic relationship with her handsome boyfriend Andrew Pozzi since 2018. Andrew is also an athlete. She is basically leading a blissful family life and therefore it's far less likely for her to get separated from her partner for any reason. It seems that Katarina is comfortable keeping her personal life open to the public. It shows how she loves her fans and leaves no page unturned to make them know what they want. Reflecting on her sexual orientation, she is straight.

What is Katarina Johnson-Thompson's net worth?

Katarina Johnson-Thompson's among those few individuals that have such a wide range of experience and remain true to whatever she embarks on. She has a net worth of $2 million as of 2022 whereas her exact amount of salary has not been disclosed yet. She has done endorsement work for several brands such as Nike, Inc., Acuvue, Barrie Wells Trust, Bulk Powders, and many others from where she earns a handsome amount of money. In addition, her major source of income is her heptathlete career and she is sincere in her work.

How tall is Katarina Johnson-Thompson?

Katarina Johnson-Thompson's got a standard height and a convincing appearance. She is 1.83 m (6 ft 0 in) tall and her body weighs around 68 kg (150 lb). She is a beautiful lady who has dark brown hair and eyes color. Moreover, her body build type is athletic.