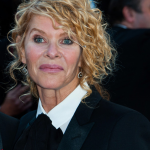 Kathleen Sue Spielberg is an American painter and retired actress who is excellently known as Kate Capshaw. She is best recognized for playing the role of Willie Scott in "Indiana Jones and the Temple of Doom". Following her gig in Indiana Jones, she acted in numerous movies, starring opposite popular actors like Richard Gere. Kate  previously taught Special Education at Southern Boone County High School in Ashland, Missouri, and Rock Bridge High School in Columbia, Missouri. Additionally, her other films include "Black Rain", "Private Affairs", "Just Cause", and "The Love Letter" (1999).

When was Kate Capshaw born?

Kate Capshaw stepped for the very first time into the world on 3rd November 1953 in Fort Worth, Texas, U.S. She was born with the real name of Kathleen Sue Nail in the  Episcopalian religious family however, she later converted to Judaism. Her nationality is American and her ethnicity is American-white. Kate has celebrated her 68th birthday as of 2021 and as per her birthdate, her star sign is Scorpio. Her mother, Beverley Sue was a travel agent and her father, Edwin Leon Nail was an airline employee.
Moving to Kate's education, she moved to St. Louis, Missouri, at the age of five, and graduated from Hazelwood Senior High, now called Hazelwood Central High School, in 1972. Later she earned a degree in education from the University of Missouri, where she was a member of Alpha Delta Pi.

Who is Kate Capshaw's husband?

Kate Capshaw is a married woman. She got married to director Steven Spielberg on 12th October 1991. The pair were married in both a civil ceremony and an Orthodox ceremony. Previously, she tied a knot with marketing manager Robert Capshaw in January 1976 with whom she had one child, Jessica Capshaw, before eventually divorcing in 1980. There are a total of seven children in the Spielberg-Capshaw family named Jessica Capshaw, Max Samuel Spielberg, Theo Spielberg, Sasha Rebecca Spielberg, Sawyer Avery Spielberg, Mikaela George, and Destry Allyn Spielberg. Furthermore, talking about Kate's sexual orientation, she is straight.

Who is Steven Spielberg?

How much is Kate Capshaw worth?

Kate Capshaw has reached great heights in her career already. She has a net worth of $100 million as of 2022 whereas she has also a handsome amount of salary which is around thousands of dollars per year. She has earned a fine amount of salary from her profession as her major source of income is her acting career. Kate has also endorsed Democratic U.S. President Barack Obama for re-election in 2012.

How tall is Kate Capshaw?

Kate Capshaw is 5 ft 7 in (1.715 m) tall and her body weighs around 64 kg. She has good-looking blonde hair and dark brown eyes color. Moreover, she has a slim body build with 35-25-35 inches of body measurements. Kate has kept her body fit and fine as an actress which has attracted a lot of people to her.