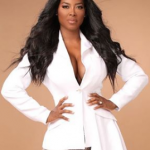 Kenya Moore is an American multi-talented personality who has made a mark in the entertainment industry as a model, actress, television personality, film producer and director. She forayed into showbiz with modeling at age 14 and became a model for the Ebony Fashion Fair cosmetic line. She won the Miss Michigan USA event in 1993. Later that year she won the Miss USA title and became the second African-American woman to achieve such feat.

What is Kenya Moore famous for?

Who are the parents of Kenya Moore?

Recalling her early life, Kenya Moore was born in Detroit, Michigan, U.S.A. Her nationality is American and belongs to African-American ethnicity. She was born to Patricia Moore and Ronald Grant. She was raised by her maternal grandmother and aunt in a friendly and entertaining environment. Information about her siblings is missing now.

Where is Kenya Moore go for education?

Concerning her educational background, Kenya attended Cass Technical High School and graduated from there in 1989. Later on, she attended Wayne State University, where she majored in psychology and minored in communication.

When did Kenya Moore start to show her talent in the entertainment industry?

Is Kenya Moore married or not?

Reflecting on her personal life, Kenya was a married woman. She is married to her longtime boyfriend Marc Daly. The couple tied the knot on June 10, 2017. They married at a private resort in St. Lucia and it was a private ceremony in front of close friends and family. On November 4th, 2018, she gave birth to a girl, named Brooklyn Doris Daly. After 2 years of marriage, she filed for divorce from Marc Daly.

Talking about her past relationships, she has been in the relationship with Allen Iverson and Mike Tyson. She is not associated with any other affair and relationship status.

What is Kenya Moore's net worth?

Being a part of the entertainment industry since 1992, Kenya earns a decent amount of money and fame through her profession as an actress and model. Based on some online reports, her estimated net worth said to be $1.5 million at present. However, her salary is yet to be disclosed. Further, her other profession like author and entrepreneur also adds up her fortune.

How tall is Kenya Moore?