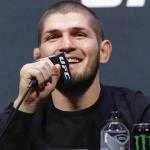 Khabib Abdulmanapovich Nurmagomedov, professionally known as Khabib Nurmangomedov is a Russia mixed martial artist. Nurmagomedov is a two-time Combat Sambo World Champion. He is the first Russian and the first Muslim to win a UFC title. He is also the current UFC Lightweight Champion. Nurmagomedov also holds the longest undefeated streak in MMA. He has an unbeaten record with 26 wins. Nurmagomedov is officially ranked No. 8 in official UFC pound-for-pound rankings as of August 6, 2018.

Nurmagomedov vs McGregor UFC 229 press conference was held today. The most awaited bout is scheduled to take place on October 6 this year. The fight between two is dubbed as the biggest fight in UFC history. Nurmagomedov is a defending UFC Lightweight Champion and McGregor is a former UFC champion.

Khabib Nurmagomedov made his professional mixed martial arts debut in September 2008. He quickly achieved four wins in under a month. A month later, Nurmagomedov won the inaugural Atrium Cup tournament on October 11, 2018, in Moscow. He defeated three opponents. Nurmagomedov continued his winning streak over the next three years. He finished 11 of his 12 opponents in doing so. Nurmagomedov competed in ProFC promotion in 2011, where he won all seven fights either by TKO or submission with a perfect 16-0 record in the regional circuits of Russia and Ukraine. He was the called up from the UFC.

Nurmagomedov signed a six-fight deal in the UFC's lightweight division in late 2011. He made his UFC debut on January 20, 2012, at UFC on FX 1, defeating Kamal Shalorus via submission in the third round. Nurmagomedov then defeated Gleison Tibau at UFC 148 via unanimous decision on July 7, 2012, and Thiago Tavares at UFC on FX7 via KO in the first round on January 19, 2013.
on May 25, 2013, Nurmagomedov defeated Abel Trujillo at UFC 160 via unanimous decision but came in over the permit limit at the weigh-ins. Nurmagomedov was given two hours to cut to the lightweight but elected instead to surrender a percentage of his fight purse to Trujillo and the bout was contested at a catchweight. Nurmagomedov had a 21 successful takedowns out of 27 attempts in a single fight, a new UFC record for most takedowns in a single fight.
Nurmagomedov challenged Gilbert Melendez on social media in December 2013. They two were expected to face off at UFC 170 on February 22, 2014, but the bout was canceled for undisclosed reasons. Melendez was then replaced by Nate Diaz, but Diaz turned the bout down. Nurmagomedov later expressed his disappointment.
Nurmagomedov pulled out his bout with Donald Cerrone twice due to a knee injury at UFC 178 and UFC 187 respectively. Nurmagomedov pulled his fight with Tony Ferguson on December 11, 2015, due to another injury. The match was rescheduled to take place on April 16, 2016. This time, Ferguson pulled out of the bout due to lung issue.
Nurmagomedov called UFC Lightweight Champion Eddie Alvarez "bullshit champ" on social media when Alvarez canceled a fight with Nurmagomedov. Alvarez rather chose to fight against Conor McGregor.
Nurmagomedov's bout with Ferguson was canceled for the fourth time when Ferguson injured his knee. Max Holloway replaced Ferguson but was pulled from the fight by New York State Athletic Commission declaring him unfit. Holloway was replaced by Al LaQuinta. Nurmagomedov beat LaQuinta with a unanimous decision, dominating from start to the finish and became the UFC Lightweight Champion.
Nurmagomedov will make all of his effort to defend the UFC Lightweight title against Conor McGregor at UFC 229 on October 6 in Las Vegas.

Nurmagomedov belongs to Avar descent. He is Sunni Muslim by religion. Nurmagomedov got married in June 2013. He has a son, Mohammed and a daughter. Name of his wife and daughter are still kept private. Nurmagomedov is a great football fan. He follows Anzhi Makhachkala and Real Madrid football clubs and Russian National football team as well. Nurmagomedov has co-founded his own team, "Eagles MMA Team", with Ziyavudin Magomedov. Ali Bagautinov, Vitaly Minakov, Islam Makhachev, Vladimir Mineev, Sergey Pavlovich, Akhmed Aliev, and Mikhail Mokhnatkin are other fighters from his team.

Fightbooth.com
2013 Staredown of the Year (vs. Abel Trujillo).

MMAdna.nl
2017 Performance of the Year

At present, the net worth of Nurmadomedov is not revealed yet. But according to some report, it is estimated to be around $2 million. It is far less than Conor Mcgregor's net worth. But with 26 consecutive wins in MMA and increase in popularity, his net worth is predicted to accelerate very high in coming years. Nurmagomedov will face Mcgregor at UFC 229 on October 6 in Las Vegas.