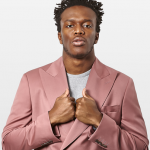 One of the British YouTube personality, internet celebrity, comedian, actor, rapper and white collar boxer is Olajide William Olatunji Jr. who is famous as KSI. KSI is shortened from his online alias KSIOlajideBT. On August 2018 he established himself on the YouTube Channel which has reached four billion videos views. And more than 19 million subscribers. He has also become well known for his music. He released his debut extended play ‘Keep Up’ in 2016.

KSI’s real name is Olajide William Olatunji Jr. He was born on 19 June 1993 in London, England, United Kingdom. His father name is Olajide Ademola Olatunji, Sr. who is known as Jide Olatunji and has been the cameraman for his son’s videos and mother name is Olayinka Atinuke Olatunji who is known as Yinka Olatunji. His parents are of Nigerian roots. He has a brother named as Deji Olatunji. His family moved to Watford. There he attended the fee-paying independent Berkhamsted School.

On 24 April 2008, he had created a YouTube channel named ‘JideJunior’. On 24 July 2009, he created his current YouTube account. In this, there is a video about the FIFA video game franchise. Weepeler and Hjerpseth inspired him to start his own YouTube career he mentioned on his website. His main channel previously focused on association football and FIFA and also played other games such as Grand Theft Auto V. His secondary channel contains videos of him playing horror, arcade and casual games. In 2012, he was the center of a controversy following his actions at a Eurogamer event. In February 2013, he appeared on the video "KSI VS FIFA // The Record Slam" made by GWRomg. In this, he was recorded in the Guinness World Records Gamer’s Edition in 2013. In October 2013, he signed with Maker Studios' sub-network.

As a rapper, he made his debut in music in 2011. He along with his fellow YouTuber Randolph, he released "Heskey Time", a rap song about footballer Emile Heskey which was released on Christmas 2011. He began doing a segment on his channel called "Football Rap Battles" which is a video series. He appeared in music videos with Droideka, directing and appearing in his music video for his song Get Hyper, also collaborating with British rapper Sway in which he released two tracks.

He completed his first white-collar amateur boxing match on 3 February 2018 at Copper Box Arena in London. He was awarded the YouTube Boxing Championship Belt.

In 2016 he won the Vlogger of the Year award in NME Award.

KSI was in relation with Seana Cuthbert who is a fellow YouTube vlogger. She is known online by the pseudonym “Seanyy”. The relationship ended after two years because Seanyyy felt she was not given attention as KSI was too busy with his YouTube channel and career.

KSI’s net worth is estimated to be $11 million.

Trivias About KSI You Need To Know.