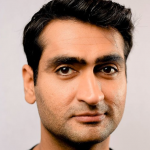 Kumail Ali Nanjiani famed as Kumail Nanjiani is a stand-up comedian, actor, writer, and podcast host. He is best known for The Big Sick, and being a main cast member on HBO's Emmy Award-nominated series Silicon Valley, as well as for providing the voice of Prismo on the Emmy Award-winning animated series Adventure Time. In the year 2017, he co-wrote a comedy movie named The Big sick with his wife Emily  V.Gordon. This movie is based on the relationship between Kumail and his wife. He hosted two podcasts: The Indoor Kids and The X-Files Files. In 2018, Time named him one of the 100 most influential people in the world.

Kumail Nanjiani’s last-minute “Conan” cancellation left the host scrambling for a new guest. At the eleventh hour, he filled the spot with an impromptu interviewee-his longtime assistant. He was scheduled to appear on the Thursday night show to promote his upcoming comedy film “Stuber.” Half an hour before the taping, Conan O’Brien received the news. “I was having my pre-show nap,” said O’Brien. “Andy was having his bath in heavy cream, and they came in and they said, ‘Kumail can’t get here.'” O’Brien brought his assistant of 10 years, Sona Movsesian, to take over for Nanjiani. She commented on the situation, “Oh s***, they really ran out of stuff to do.” Movsesian claimed she was unaware she would be interviewed. But for her, that’s par for the course. “That’s kind of like how my job is just regularly,” she said. “No one tells me anything.” He tweeted a more sincere apology for skipping out on the show: “@ConanOBrien is my comedy hero. He and @AndyRichter are the reason I started comedy. So this clip is something I would love if it was about anybody other than me. But it’s about me, so I’m truly mortified.”

Kumail Nanjiani was born on 21st February 1978, in Karachi, Sindh, Pakistan. His father name Aijaz Nanjiani and Shabana is his mother name. He was born and raised in Pakistan he moved to the states in 1996, at the age of 18. His parents are Muslim by religion. His nationality is Pakistani and his ethnicity is Asian. He studied at Karachi Grammar School in Karachi, Pakistan when he was a child. He moved to the USA for further studies in 1996. He attended the Grinnell College in Iowa and graduated in 2001 with a double major in computer science and philosophy.

Kumail Nanjiani is a very handsome comedian as well as he has got an average height of five foot and eight inches. He has a balanced weight of 76 Kg. More information regarding his body measurements, bicep size and more will be added soon. He has got a very charming smile on his lips attracting a lot of people towards him. Overall, he has got a very healthy body and he maintains his body a lot.

Kumail Nanjiani is a married person. He was married to Emily V. Gordon. Emily V. Gordon works as a host, producer, writer, and program director. The couple took their vows together at City Hall in Chicago on July 14, 2007. They have been happily married ever since. The couple now lives together at their residence in Los Angeles, California. The couple is enjoying their life a lot and they are planning to have a baby soon.

Net Worth of Kumail Nanjiani

Kumail Nanjiani is a very successful comedian as well as an actor. His profession has paid him a big fortune and fame. He has accumulated a lot of money from his career. He has an estimated net worth of $6 million as of 2019 but his exact salary has not been revealed yet but it will be added soon but there is no doubt in the mind of his follower that he is earning a good amount of salary.