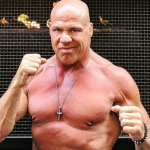 Kurt Angle is an American retired professional wrestler, Olympic gold medalist in American freestyle wrestling, and former collegiate wrestler who is renowned for making the most successful transition from amateur to professional wrestling. In 1998, he made his first in-ring appearance on the professional wrestling circuit before signing an eight-year contract with the 'World Wrestling Federation (now World Wrestling Entertainment). He made his official WWF in-ring debut in November 1999. He left WWE in 2006 and joined their biggest competitor, 'Total Nonstop Action Wrestling (TNA, now Impact Wrestling), where he spent the majority of his career. After 11 years, he returned to WWE in 2017 and served as the general manager of Raw. He wrestled again, headlining multiple pay-per-view events. Between WWF/WWE, Japan and TNA, Angle has won 21 total championships and overall is a 13-time world champion. He is the only pro-wrestler in history to have won the WWE Championship, WWE's World Heavyweight Championship, the WCW Championship, the TNA World Heavyweight Championship, and the IGF's IWGP Heavyweight Championship. Angle is also the only person to have been King of the Ring (WWE) and King of the Mountain (TNA), as well as to have held both the WWE and TNA Triple Crowns. He is considered one of the greatest professional wrestlers of all time. As an actor, he has appeared in River of Darkness, Sharknado 2: The Second One, OK K.O.! Let's Be Heroes, and more.

What is Kurt Angle Known For?

What is Kurt Angle's Real Name?

Kurt Angle was brought into the world by his parents on 09 December 1968. He is from Mt. Lebanon Township, Pennsylvania, the United States. His real name is Kurt Steven Angle. The name of his mom was Marie Jacqueline Barwick Angle aka Jackie (Expired in 2015 due to Cancer) and his dad was Dave Angle (Crane Operator) (Deceased, Expired 1985). His siblings are LéAnn Angle (Older Sister) (Respiratory Therapist, Expired 2003), David Angle (Older Brother) (Convicted to a prison sentence for voluntary manslaughter of his wife in 2016), Mark Angle (Older Brother) (President, Business Agent), John Angle (Older Brother) (Crane Operator / Truck Driver), Eric Angle (Older Brother) (Former Wrestler). He holds American nationality and his ethnicity is Mixed as he has Italian, Irish, English, German, and Lithuanian ancestry. Kurt attended Canon-McMillan High School and then graduated from Mt Lebanon High School in 1987. Then, he obtained his bachelor's degree in education from Clarion University.

Everything To Know About John Cena

The theme song for World Wrestling Entertainment (WWE) competitor Kurt Angle is "Medal". He began using The Patriot's theme "Medal" (also used once by Sgt. Slaughter) for his ring entrance, which became associated with Angle for the rest of his career. The title of the song references both the freestyle-wrestling gold medal Angle won at the 1996 Summer Olympics and Angle's penchant for rubbing his Olympic accomplishment in other WWE wrestlers' faces. The song is instrumental with no lyrics, but when Angle walks out to it at WWE events the crowd rhythmically chants "you suck" along with the music. The song was composed by Jim Johnston.

What is Kurt Angle's Net Worth?

Kurt Angle is a retired wrestler, Olympic gold medalist in American freestyle wrestling, and former collegiate wrestler who has made a huge amount of money from his career. As of 2022, the net worth of Kurt is estimated to have $25 million. As per reports, his annual salary from his career is more than $5 million. He is living a lavish lifestyle from his career earnings. He was sponsored by Coca-Cola in the 1996 Summer Olympics. He was cast in US national commercials for Direct Auto Insurance, Subway – WWE Wrestlemania, and Vocelli's Pizza in the past. He was featured in every WWF turned WWE video game from 2000 to 2006 and WWE 2K18, 2K19, and 2K20. His other video game appearances include TNA Impact!, TNA Wrestling, and TNA Wrestling Impact! He formerly made promotional appearances for Walmart, K-Mart, Coca-Cola, AT&T, Walgreens, NASCAR, and GNC. He co-owns and promotes his supplement company with IFBB Pro David Hawk called Barndad Nutrition. In 2002, Kurt Angle purchased a home in the town of Coraopolis, which is just a few miles northwest of Mt. Lebanon. Angle paid $649,900 for the contemporary style stone home which offers four bedrooms, three full bathrooms and a half, a swimming pool, and 3,732 square feet.

Who is Kurt Angle's Wife?

Kurt Angle is currently a married man. He tied the knot with his wife, Giovanna Angle on 20 July 2012. Giovanna is an actress by profession. They have 3 daughters namely Giuliana Marie (b. January 2011), Sophia Laine (b. December 2012), and Nikoletta Sky (b. November 2016). In June 2019, the couple adopted a son from Bulgaria. His sexual orientation is straight. 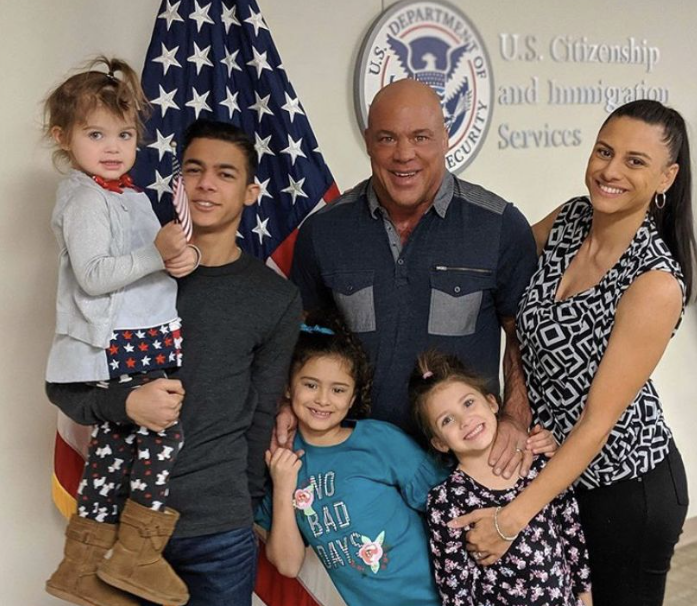 Previously, he was married to Karen Jarrett on 19 December 1998 and the couple was blessed with two children. Their daughter Kyra was born in December 2002 and a son Kody was born in October 2006. They officially divorced on 26 October 2008. He also had a romantic fling with Trenesha Biggers from 2008 to 2009.

How tall is Kurt Angle?

Kurt Angle stands at the tall height of 5 ft 9 inches and his body weight is 100 kg. He has blue eyes and his hair color is bald. He maintains a shaved head. His body type is muscular.

Trivias About Kurt Angle You Need To Know.