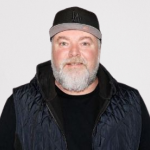 Kyle Sandilands is an Australian radio host. He is considered one of the most powerful figures in Australian media. He is currently the co-host, with Jackie O, of the weekday morning radio program The Kyle and Jackie O Show on Sydney's radio station KIIS 106.5.

Sandilands has become known for controversial on-air stunts and offensive comments and for this reason he has been named the most hated Australian identity two times in a Zoo Weekly article. This has led to companies removing their advertisements, findings of serious breaches of the Industry Codes of Practice and Guidelines, and to his firing from Australian Idol.

What is Kyle Sandilands famous for?

Where is Kyle Sandilands from?

Kyle Sandilands was born on 10th June 1971 in Brisbane, Queensland, Australia. His birth name is Kyle Dalton Sandilands. He holds an Australian nationality and belongs to the Caucasian ethnicity. His birth sign is Gemini. He is a follower of Christianity.

Sandilands was born into a middle-class family. Growing up in Wynnum, Brisbane, his childhood didn't go well as his parents got divorced when he was only 10 years old. He was deeply affected by his parent's divorce. When he was 16, he was thrown out by his mother and stepfather from their house. He lived on the streets for several months and later was raised by his father's sister Jill Stevens.

Kylie Sandilands has been married once to the pop singer Tamara Jaber on 26 September 2008. However, on 12 July 2010, it was reported the couple had split due to a series of quarrels and misunderstandings. Before getting divorced, the couple lived two years as husband and wife in a house in St Ives, located in Sydney's Upper North Shore.

Currently, Kyle has been romantically linked with a beautiful lady named Tegan Kynaston since 2019. After dating for a year, the pair got engaged in Queensland over the Christmas holidays in 2021. As of now, the Radio host and his beautiful fiancee are expecting their first child in due August of this year, Moreover, they have already decided on boy's and girl's names.

Previously, Kyle was in a relationship with model Imogen Anthony. The duo famously dated from March 2012 which was extensively covered by several Australian media. However, their relationship came to end after seven years in 2019.

Who is Tegan Kynaston?

How much is Kyle Sandilands's net worth?

As of February 2022, the net worth of Kyle Sandilands is estimated to be the US $40 million. He accumulated his huge fortune through his successful career as a Radio host and through his contract with reality shows. Sandilands was paid $255,000 per year while working on the Hot30 during the 2000s.

In October 2019 Kyle and Jackie O signed a $50 million contract with KISS FM, the biggest ever media deal signed for talent in Australia. The contract now pays each host roughly $40,000 per show and runs through 2024. While calculating his salary from all his income sources, his annual earnings come to be a staggering amount of $5 million.

How tall is Kyle Sandilands?

Kyle Sandilands is around 6 ft 1 inch tall and his body weight is assumed to be massive 146 Kg due to his huge plus-sized bulky body. In 2020, he put on a whopping 16kg. The following year, he debuted his dramatic transformation, showing off his impressive weight loss and his new short sides, long with a top hairstyle that is Yellow in color. He looks gentleman in his French-cut beard.

Trivias About Kyle Sandilands You Need To Know.