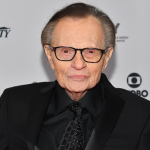 Larry King is most famous for his late-night talks show Larry King Live, which he hosted for 25 years at CNN news source. King is popular for his commendable interviewing style who has interviewed many of the world’s renowned celebrities that many broadcasters could only dream of.

He reshaped the landscape of broadcast journalism when he launched his talk show Larry King Live in June 1985. He has won several awards including two Peabodys and 10 Cable ACE Awards. He hosts Larry King Now on Hulu and RT America during the week and on hosts Politicking with Larry King- a weekly political talk show which airs in the evening on the same two channels.

What is Larry King known for?

Longtime talk-show host and former CNN interviewer Larry King is recovering in a hospital after undergoing a procedure to address chest pain, known medically as angina, Ora TV said in a statement.

He had been scheduled for an angioplasty but visited the hospital early last Thursday to be examined for the chest pain, said the statement, issued Monday.

"His doctor successfully performed the angioplasty and inserted stents to reopen the previous bypass from 1987," the statement said. "He has been recuperating in the hospital and is scheduled to be released soon. His doctors expect him to make a full recovery."

Ora TV, an on-demand digital TV network, said that contrary to some media reports King's doctors say he did not have a heart attack and did not go into cardiac arrest.

"Larry is in good spirits and thanks to everyone for their concern. He's expected to be back to work on his shows, 'Larry King Now' and 'PoliticKING with Larry King' soon," the statement said.

King, 85, has had several heart attacks, and in 1987 he underwent quintuple bypass surgery. His medical issues led him to establish the Larry King Cardiac Foundation, a non-profit dedicated to helping those who do not have health insurance to afford medical care.

King began his long broadcasting career in the late 1950s as a radio deejay in Miami.

King was diagnosed with lung cancer in 2017 and underwent successful surgery to treat it.

Where is Larry King born?

Back to his early life, Larry King was born as Lawrence Harvey Zeiger in Brooklyn, New York, U.S. He is an American by nationality and belongs to the white ethnic group. His birth sign is Scorpio. He is the son of Jennie Gitlitz, a garment worker and Aaron Zeiger, a restaurant owner.

Larry King received his education from Lafayette High School in New York. His father died of heart failure at the age of 44. He lost interest in school, as he greatly affected by his father's death.

After graduating from Lafayette High School, he worked to help support his mother and did not go to college.

When did Larry King pursue his hosting career?

Awards and Achievements of Larry King

To whom Larry King was married?

Besides his professional career, he is famous for his eight-time marriages with seven women - Freda Miller, Annette Kaye, Alene Akins, Mary Francis Stuphin, Sharon Lepore, Julie Alexander, and Shawn Southwick. He married Alene Akins twice. He has eight children in total. His last marriage with Shawn Southwick is the only marital relationship that has sustained for the double-digit number.

Even they filed for the divorce recently, but have since stopped the proceedings. So, to say his personal life is far behind to perfection that his flourishing professional life.

For the most part of his early life, he has been a fervent smoker. In 1987, he suffered from a major heart attack and has gone through a number of surgeries to correct his heart disease issue.

He has authored two books about living with heart disease titled, ‘Mr. King, You’re Having a Heart Attack: How a Heart Attack and Bypass Surgery Changed My Life’ and ‘Taking on Heart Disease: Famous Personalities Recall How They Triumphed over the Nation’s #1 Killer and How You Can, Too’.

In terms of religious views, Larry King never believes that he would be ‘going anywhere (heaven/hell)’ after he died.

How much is Larry King net worth?

According to online websites, Larry King’s net worth is $150 million, as of 2019. He is one of the richest celebrities in America. He has made a huge fortune with his successful career as a television and radio host. According to some sources, he makes $10K plus for a week from thirty-second ads linked to his videos which have over a million views on his several YouTube videos.

He hosted his show Larry King Live, from 1985-2010 in CNN network and used to receive $7 million salaries per annum. He earns over $5 million annually from his career. He lives in a lavish mansion in Beverly Hills which cost $12 million. He has a collection of a car of several brands including:

How tall is Larry King?

Observing his body statistics, King stands a height of 5 foot 9 inches and weighs around 80 kg. Similarly, He has a pair of dark brown eyes and Gray hair color. His other body information was not disclosed yet. in the case of disclosed, we will let you know.