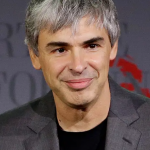 Larry Page is a popular American computer scientist and also an internet entrepreneur whose name has been enlisted in the 10th rank of "Billionaire 2019" as Forbes. Billionaire Page is best known for being one of the co-founders of Google along with Sergey Brin. Page was also the chief executive officer of Alphabet Inc.(Google's parent company) until he stepped down from the post on December 4, 2019. He is also the co-inventor of "PageRank" along with Brin and together they have received the Marconi Prize in 2004.

What is Larry Page Famous for?

Where is Larry Page From?

Larry Page was born on March 26, 1973, in Lansing, Michigan, United States. His birth name is Lawrence Edward Page. His nationality is American. Page belongs to White ethnicity while Aries is his zodiac sign.

Larry Page was born in a well-educated and rich family and is the son of Carl Victor Page, Sr(father) and Gloria Page(mother). His father was a computer professor at Michigan State University and was even described as a "pioneer in computer science and artificial intelligence.

While his mother was an instructor in computer programming at the same college, Lyman Briggs College of Michigan State University.

Belonging to a family with a technology background, his whole house was a mess with computers, science, and technology magazines all over the place. He even was an avid reader during his childhood and also played the flute. Page was first attracted to computers when he was only six years old.

Page even became the first child in his elementary school who did an assignment from a word processor back then.

Larry Page Early Career: When Did He meet Sergey Brin?

Page was raised in Michigan where he attended the Okemos Montessori School and then graduated from East Lansing High School in 1991. Later then he graduated holding a Bachelor of Science Degree in Computer Engineering from the University of Michigan, with honors and

a Master of Science in computer science from Stanford University. While he was at the University of Michigan, he created an inkjet printer. Besides, he attended Interlochen Center for the Arts as a saxophonist.

The page also served as the president of the Beta Epsilon chapter of the Eta Kappa Nu fraternity and was a member of the 1993 "Maize & Blue" University of Michigan Solar Car team as well. During his time at Stanford University, he explored the mathematical properties of the World Wide Web and also researched telepresence and self-driving cars. He soon came in touch with Sergey Brin, a fellow student with whom he began a research project, "BackRub". The duo together authored a research paper titled "The Anatomy of a Large-Scale Hypertextual Web Search Engine", which became

one of the most downloaded scientific documents in the history of the Internet at the time.

Who is Larry Page Married to?

The 46 years old billionaire entrepreneur, Larry Page is a married man. He is married to his wife, Lucinda Southworth. Southworth is also a research scientist and is known for being the sister of actress and model, Carrie Southworth.

The couple got married with a huge wedding ceremony in 2007 on Necker Island. Page and Southworth together have two children:

How Much Does Larry Page Earn From Google?

The co-founder of the website "Google", Larry Page has an estimated net worth of $62.7 billion as of 2019 which makes him the seventh richest person in the world.

He has been making a huge amount of money from his co-founded website "Google". Google is the most used website in 2019. His partner, Sergey Brin is the 9th richest person in the world with his net worth of $60.9 billion as of 2019.

At present, he is living a luxurious lifestyle.

How Tall is Larry Page?