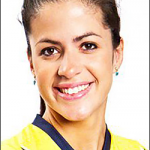 Ungerer Luiza Carvalho Rocha famed as Luiza Ungerer is a Brazilian player of volleyball. She plays libero. She plays by wearing shirt number of 1o for the club, Berziers Volley. Her post is a sweeper. She is a left-handed player.

What is Luiza Ungerer famous for?

Luiza Ungerer, a Brazilian volleyball player, claims she was dating Emiliano Sala at the time of his death and has spoken about their relationship and her reaction to the tragedy. She revealed that they were exchanging messages on the day of the accident. Once the body was recovered, she took to Instagram to declare her love for the Argentine."I will love you forever," she wrote.
Now Luiza, who plays for Beziers Angels in France where Emiliano spent most of the last decade playing football, has had his shirt number tattooed on her left arm. She showed off the inking on her reddened skin on her Instagram alongside a heart and the message ‘Para Siempre Emi’ - which in English means ‘For Ever Emi.’ The number ‘9’ was tattooed on her arm under a field of flowers. She spoke about her relationship with the 28-year-old Argentinian in an interview with Brazilian news site Globo, saying they had met when they were both playing for teams in France.

Who is Luiza Ungerer Secret Lover Emiliano Sala before death?

Where is  Luiza Ungerer grown up?

Luiza Ungerer was born in Rio de Janeiro with the birth name of Ungerer Luiza Carvalho Rocha. Her nationality is Brazilian and ethnicity is white. Her horoscope sign is Capricorn. Her other early life background such as parents, education, childhood, siblings and more will be updated soon.

What does Luiza Ungerer do?

Speaking about her career, She began her professional career through a Bralizan club Rexona / Ades, present name is RJ Sesc Vôlei in 2005. She played for RJ Sesc Vôlei 5 year, 2005 - 2010. After that, she moved to another Brazilan club AD Abrupt in 2010. She played only one year for AD Abrupt and moved to the French club, SES Calais in 2011.
From 2011 - 2013, she played for SES Calais and again moved another French club VB Nantes. She played for VB Nantes 5 years and moved to Beziers Volley in 2018. At present, she plays for Beziers as a sweeper.

How many Awards has Luiza Ungerer won in her career?

How much is Luiza Ungerer Net Worth?

The net worth and salary of this famous player is still to get unfold and is still under review. Her major source of earning is from her volleyball career. She is satisfied with her career.

Entering into her personal life, her current marital status is single. Recently, the news came out that she dates Emiliano Sala before his death which surprises people more. Furthermore, Her sexual orientation is straight.

How tall is Luiza Ungerer?

Ungerer is a beautiful player. She has a height of 5 feet 5.5 inches (1.66 m) tall and balanced weight of 54 Kg. Her other body measurement will be updated soon.

Trivias About Luiza Ungerer You Need To Know.