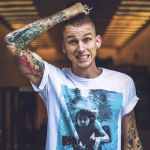 Richard Colson Baker professionally known as Machine Gun Kelly is an American rapper, singer as well as an actor. He is nicknamed as MGK. His major label debut album, "Lace Up", was released in October 2012. In early 2015, he released the singles "Till I Die" and "A Little More" for his second studio album, General Admission, which released in October 2015. His third studio album, Bloom was released on May 12, 2017, preceded by "Bad Things" with Camila Cabello. He has also appeared in various films, starring in "Beyond the Lights".

After hearing his name dropped on Eminem's surprise "Kamikaze" album, Machine Gun Kelly took the weekend to pen his response on wax and take aim at one of his idols on the eviscerating "Rap Devil" on Monday (September 3). MGK showers the rappers coming up after him with praise. He realizes Eminem's wrongdoing in going after the young MCs and promises he would never try to destroy or hurt their careers in the future. Kelly then moves into once again questioning how Em is still so mad at the world when he's one of the most critically acclaimed and commercially successful artists to ever grace the mic.

Machine Gun Kelly was born on 22nd April 1990 with a birth name of Richard Colson Baker in Houston, Texas, the U.S. His nationality is American. He was born to missionary parents. Baker and his family moved all around the globe and took up residence abroad from Egypt to Germany. He settled in Denver, along with his father, after his mother had left home. His birth sign is Taurus. His father name is James Colson Baker and his mother name is Sonia Alane Waring. His ethnicity is Mixed.

He attended Hamilton Middle School and then he started listening to rap from his sixth grade. The first three rappers that got him into the genre of hip-hop as a child were Ludacris, Eminem, and DMX. When he attended Denver's Thomas Jefferson High School, his father moved to Kuwait to work. Later, he began to take drugs and recorded his first demo tape "Stamp of Approval". After that, he stopped attending school. Then, his father returned and he attended Shaker Heights High School. He was given a name Machine Gun Kelly by his fans due to his rapid-fire delivery, he released the mixtape Stamp of Approval (2006).

MGK has got a slim body build. He is very smart and looks very cool in his own style and body looks. Talking about his height, he stands 192 tall which suits him a lot. Kelly maintained his body a lot. His balanced weight is of 76 Kg. He has a healthy body. His look is very handsome. The color of his hair is Blonde and the color of his eye is Blue. His sexual orientation is Straight. He has got numerous tattoos and has an ear piercing.

Who is Fitness Model, Sommer Ray?

MGK is not married yet but he has a child named Casie who was born in the year 2008 with an unidentified woman.

Net Worth of Kelly

The net worth of this famous rapper, Machine Gun Kelly is estimated to have $8 Million as of 2018. He is earning a good amount of money from his work and he is satisfied with his earning. His salary is still to get unfold and will be updated soon.

Trivias About Machine Gun Kelly You Need To Know.